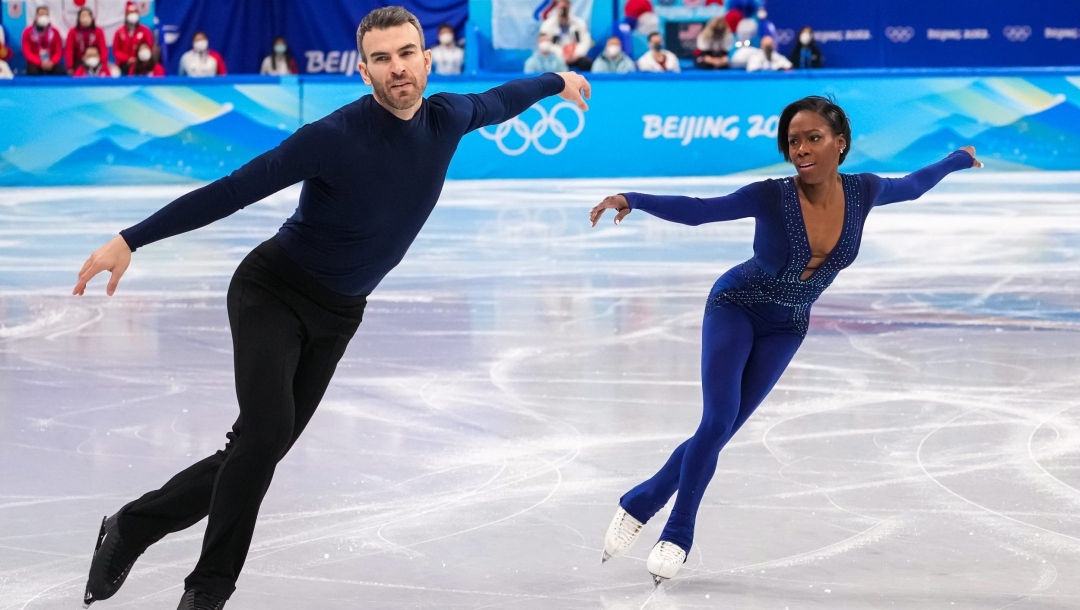 Duhamel and Radford had won back-to-back world titles in 2015 and 2016, making them the first Canadian pair to successfully defend their world gold medal since Barbara Wagner and Robert Paul won four straight from 1957 to 1960. Their first world title capped an undefeated season that included wins at both of their Grand Prix events, the Grand Prix Final, and the Four Continents. Radford and Duhamel had previously won bronze medals at the 2013 and 2014 World Championships, the latter coming after they had helped Canada win silver in the inaugural Olympic team event in Sochi.

In April 2018, Radford and Duhamel announced their retirement from competitive skating. Over the next couple of years, they participated in national tours and joined the revival of CBC’s Battle of the Blades, for which they were each partnered with hockey players. Also among the figure skaters on the show was Vanessa James, who was Canadian born but had represented France at three Olympic Games and won a world bronze medal in 2018 and a European title in 2019 with her former partner.

In April 2021, James and Radford officially announced that they were forming a partnership with the intention of competing for Canada at Beijing 2022. They won silver at their first international event together, the Autumn Classic on the ISU Challenger Series. They followed up with a fifth-place finish at another Challenger Series event, the Finlandia Trophy, before making their Grand Prix debut as a team at Skate Canada International. They were the top Canadian team with their fourth-place finish. They also finished fourth at their second Grand Prix, the Internationaux de France.

Named to the Olympic team for Beijing 2022, James and Radford were part of Canada’s fourth-place finish in the team event and placed 12th in the pairs event. A month later, they stood on the podium together at the ISU World Championships, winning the bronze medal.

Early in his career, Radford had enjoyed success as a singles skater, winning the Canadian novice title in 2002 followed by the junior title in 2004. But as he grew, his height made him better suited for pairs. As a senior skater, he teamed with two different partners without much progress before Duhamel became available after she came one place shy of qualifying for Vancouver 2010. At the suggestion of coach Bruno Marcotte, the two had a tryout. The two skaters had never thought about teaming up, even though they were both from small northern Ontario towns. They each had strong individual technical skills from competing as singles. That background allowed them to include the most difficult of triple jumps amongst the pair skaters, triple Lutzes. They added a quad throw Salchow to their repertoire in 2014-15. Radford battled through a herniated disc at the 2017 World Championships, which forced the pair to alter some elements in their programs and contributed to a seventh-place finish. In December 2017, they won bronze at the Grand Prix Final, the fourth straight year they stood on the podium at that event.

Getting into the Sport: Fell in love with skating while watching Kurt Browning and Elvis Stojko in the early 1990s… Loved that it was a sport performed to music… Started skating at age eight; his first figure skates were white that his dad painted black… Moved away from home at 14 to Kenora then Winnipeg at 15 and Montreal at 16… Outside Interests: A member of the COC’s #OneTeam initiative promoting inclusion in sport; believes his story and accomplishments as a gay athlete can help and inspire other young LGBTQ athletes… Passionate about piano; has said that as important as skating is in his life, composing and playing music is also a huge part… Composed the music that Duhamel and Radford used for their short program in 2013-14 and that Patrick Chan used for his free skate in 2016-17… Studied music for two years at York University… Has his Grade 9 Royal Conservatory of Music certificate… Enjoys playing video games … Odds and Ends: Hometown of Balmertown is more than a 20 hour drive from Toronto, home to 1000 people and one arena… Favourite motto: Keep your feet on the ground and your eyes on the stars… While visiting the Wailing Wall in Jerusalem he wrote on a piece of paper “win the world championship”, a wish that came true twice…