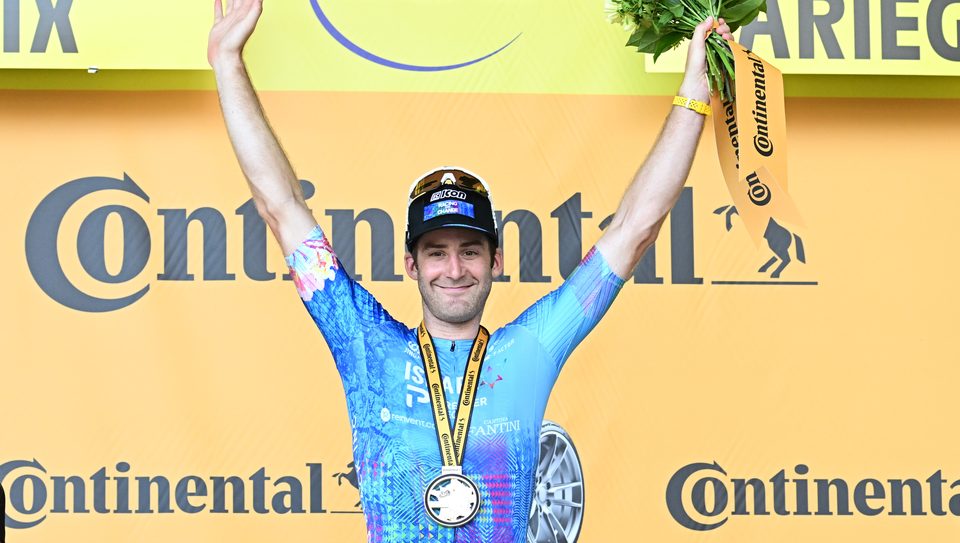 Hugo Houle has put his name into the history books by winning Stage 16 of the 2022 Tour de France.

In doing so, he became just the second Canadian to ever win a stage at the most prolific of cycling’s Grand Tours. Houle’s victory comes 34 years after Steve Bauer won the first stage of the 1988 Tour de France. Bauer is at this year’s Tour as sports director for Houle’s pro team, Israel-Premier Tech.

It was an emotional day for Houle, who had longed to earn his first international road race win in memory of his younger brother Pierrik, who was killed by a drunk driver while he was jogging in 2012. He had lots of time to celebrate his pending victory as he held more than a minute lead over the closest chasers as he pedalled through the last few kilometres.

“I had one dream: win the stage for my brother who died when I turned professional,” Houle said as he held back tears. “Today that win is for him. I’ve worked for 10, 12 years and today I got my win for him. It’s incredible. I don’t know what to say. I’m just so happy.”

Finishing in third place was Houle’s fellow Canadian and Israel-Premier Tech teammate Mike Woods, who was just beaten out by Frenchman Valentin Madouas for the second spot on the podium. It was just four days ago that Houle finished third in Stage 13.

On Tuesday, Houle covered the 178.5km of Stage 16 from Carcassonne to Foix in southern France in 4 hours 24 minutes and 57 seconds. He earned the combativity award for the day for his aggression and attack on the course.

Houle had moved into the lead as he approached the foot of Mur de Péguère, the final climb of the stage about 40km from the finish. He rode solo over the crest, with Woods among those chasing from behind.

“When I attacked it was basically to set the table for Michael Woods,” Houle said afterwards of his race plan. “When I saw that they let me go, Mike made a gap and I just went full gas. In the end I hang on, I hang on, I was suffering so bad in the steep climb. I know if I go to the top with 30 or 40 seconds (lead), maybe I could do it.”

After gaining more time in the technical section, Houle was shown that he had a one minute lead.

It was still not an easy finish. Houle admitted he was starting to cramp and was missing some food because he hadn’t made contact with his team’s support car for the last 60 kilometres.

Houle now sits 26th in the general classification rankings with five stages to go before Sunday’s conclusion on the Champs-Élysées in Paris.