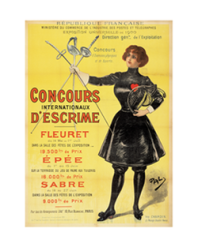 Games of the II Olympiad

The 1900 Olympic Games were held in Paris as part of the Exposition Universelle Internationale (the World’s Fair), with hopes that this would help increase awareness of the Olympic Games. Instead, the fair organizers took control of the events, spreading the competitions over five months and de-emphasizing their Olympic status to such an extent that many athletes never knew they had actually participated in the Olympic Games. It was in Paris that women made their first appearance at the modern Games, competing in golf, tennis, sailing, and croquet.

Although some medals were awarded, most winners received cups and trophies. Among them was George Orton, a Canadian runner from Ontario who was studying in the United States. In the span of one hour, he won gold in the 2500m steeplechase and bronze in the 400m hurdles to become Canada’s first ever Olympic medallist.