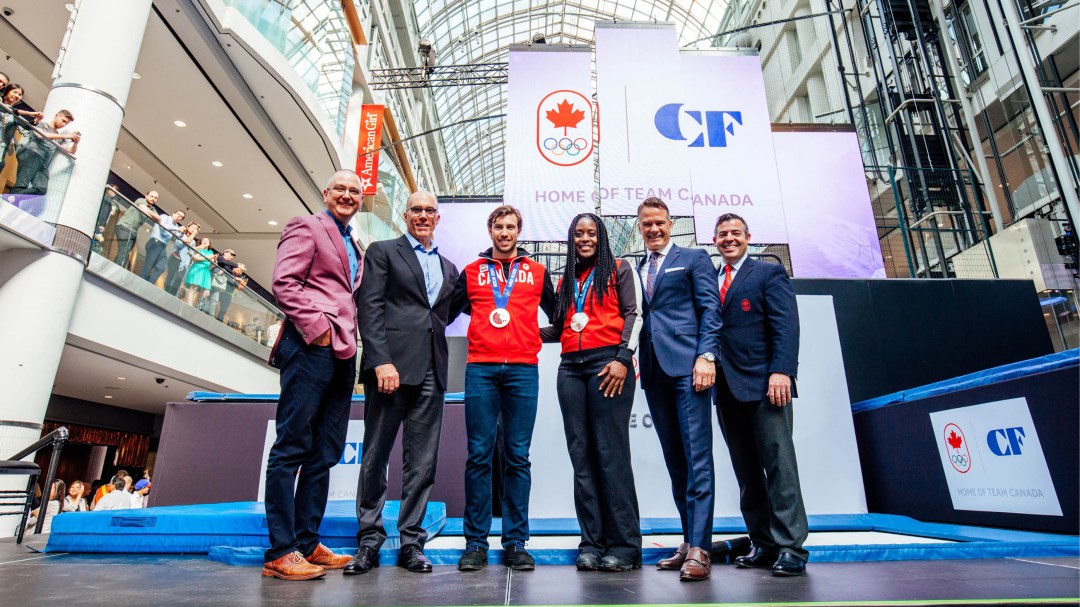 TORONTO, ON – September 20, 2017 – On Wednesday, two of Canada’s most notable organizations teamed up, as Cadillac Fairview (CF) and the Canadian Olympic Committee (COC) announced an 11-year partnership aimed at growing and supporting the Olympic Movement in Canada. This move names CF as the Official Home of Team Canada, reinforcing CF’s ongoing commitment to building and owning vibrant, landmark destinations that deliver unique, elevated experiences.

“CF has a long history of transforming and supporting the communities we operate in, developing meaningful relationships that extend beyond bricks and mortar,” said John Sullivan, President & CEO, Cadillac Fairview.  “We believe in the power of great teams and following months of planning, we are excited to officially join forces with the COC and look forward to building a program that will bring the Olympic spirit and sense of optimism to Canadians and visitors coast-to-coast in the communities we serve.”

As the Olympic Winter Games PyeongChang 2018 approach, CF and the COC will harness the country’s energy and excitement to activate consumer experiences and viewing opportunities across their portfolio of shopping centres and offices towers. As the Official Home of Team Canada, the partners will welcome and inspire Canadians and communities to unite, connect and rally behind our national athletes. Beyond the Games, the partners will look to build programming that emulates the passion, dedication and energy the Olympic Games and COC stand for.

“Team Canada now has an official home where Olympians, fans and partners can come together to promote the values of the Olympic Movement,” said Chris Overholt, CEO, Canadian Olympic Committee. We invite the thousands of Canadians that pass through Cadillac Fairview properties daily, to watch and support Team Canada as they compete at PyeongChang 2018 and beyond.”

As part of the agreement, the COC will now be headquartered at CF’s 250 Yonge Street office tower, part of CF Toronto Eaton Centre’s office portfolio. The COC will make its home on the 30th floor post Olympic Winter Games PyeongChang 2018.

Cadillac Fairview is one of the largest owners, operators and developers of best-in-class office, retail and mixed-use properties in North America. The Cadillac Fairview portfolio is owned by the Ontario Teachers’ Pension Plan, a diversified global investor which administers the pensions of more than

The Canadian Olympic Committee (COC) leads the achievement of the Canadian Olympic Team’s podium success and advances Olympic values in Canada. Independent and predominantly privately funded, the COC delivers resources that Canada’s elite athletes need to prepare the Team for the Olympic Games, Youth Olympic Games, and Pan American Games. By sharing our athletes’ stories, we inspire all Canadians: 24 hours a day, 7 days a week, 365 days a year.