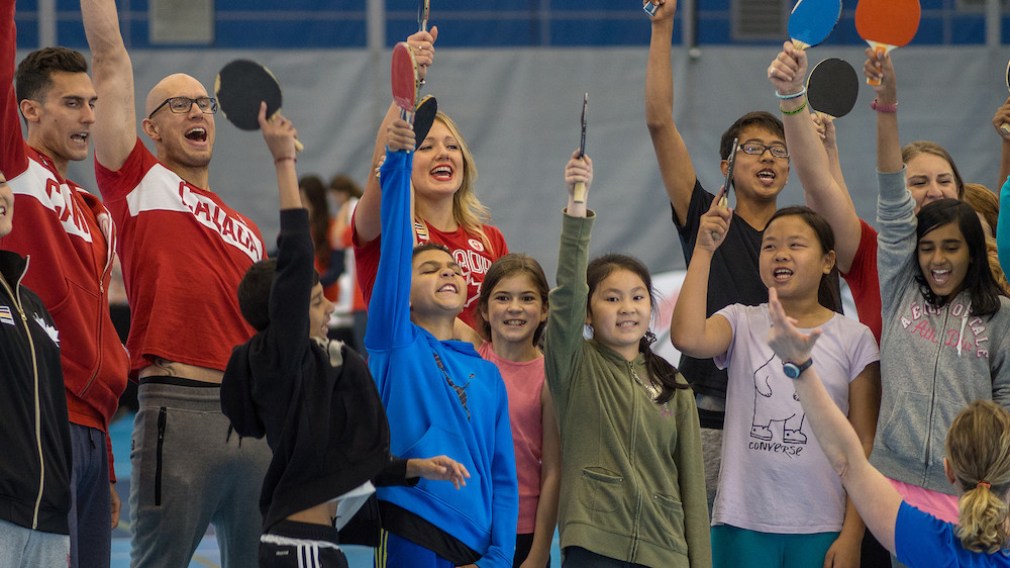 RICHMOND — On Tuesday, Canadian Olympians, in conjunction with the Richmond Olympic Oval, viaSport, BC Sports Hall of Fame and Canadian Tire Corporation, celebrated Olympic Day in Richmond with over 3,500 students.

Olympic Day is a great opportunity for children and youth to discover and try a new sport, while inspiring them to find their own Olympic journey. With Olympians in attendance, it also provides participants the opportunity to engage with their Olympic heroes and sport role models.

The students from the Vancouver School Board and the Delta School District enjoyed many sports including wheelchair rugby, wheelchair basketball, golf, volleyball, basketball, athletics, rhythmic gymnastics, speed skating, table tennis, bobsleigh and rock climbing with special activations from viaSport, the Richmond Olympic Experience and BC Sports Hall of Fame.

International Olympic Day is celebrated worldwide annually on or around June 23rd in honour of the founding of the modern Olympic Games and is a way to create awareness of the Olympic Movement and the Olympic values. In celebration of Olympic Day, the Canadian Olympic School Program has developed special resources to bring to Olympic Movement to communities across Canada. Free resources are available at Olympic.ca/education.

“Olympic Day celebrates the values of Olympism while providing an opportunity for the community to engage in sport and learn more about healthy lifestyles. I welcome the students of Richmond who have come out to the Olympic Oval and encourage them to enjoy a great day of sport and activities with some of Canada’s greatest Olympic heroes.”

“I’m so happy to be here to celebrate Olympic Day with students of Richmond. We’ve got some awesome activities going on today and this is a great opportunity for the youth to engage in the Olympic values as well as learn about the importance of keeping active and playing sport. Thanks to all schools who have come out.”

“Richmond is delighted to again host this tremendous celebration that teaches our youth the values of Olympism, sportsmanship and the pursuit of excellence, while demonstrating the benefits of sport for life and active lifestyles.”