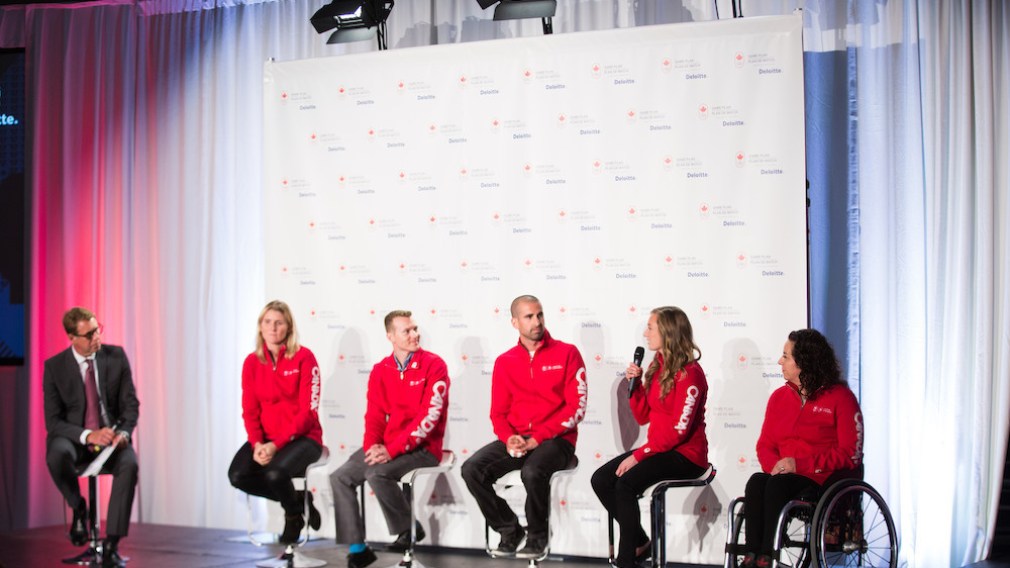 December 6, 2016
Tuesday, December 6, 2016 — TORONTO – Today, the Canadian Olympic Committee (COC), the Canadian Paralympic Committee, the Government of Canada (Sport Canada), and the Canadian Olympic and Paralympic Sport Institute Network announced a new initiative in collaboration with nine universities across the country to offer Canadian National Team athletes more flexible education opportunities while they are training and competing. The universities include Royal Roads University, University of British Columbia, University of Calgary, Athabasca University, Ryerson University, Queen’s University, McGill University, Concordia University, and TÉLUQ University.These universities will be part of the first-ever Game Plan Education Network. Each of these nine institutions will provide the following accommodations within the parameters of their existing policies to help athletes succeed in the dual role of athlete and student while representing Canada on the world stage:

Game Plan’s team of athlete advisors will work alongside each university appointed staff member to ensure athletes are supported. The aim is to expand the Game Plan Education Network in the future by having more universities, colleges, and other post-secondary institutions join across Canada.

The Education Network is launched as part of Game Plan, Powered by Deloitte, an athlete holistic wellness and transition program initiated in September, 2015. The program aims to support active and recently retired Olympic, Paralympic, and National Team athletes in all areas of life by offering a wealth of services and resources including career management expertise, health services, education opportunities, skill development and networking. Since its launch, over 600 athletes have used Game Plan resources and 230 have attended the first two annual Game Plan Summits, held in Vancouver and most recently in Toronto at Deloitte University, located in the firm’s new national office.

This announcement comes on the heels of a truly groundbreaking partnership struck between the COC and top Canadian business school, Smith School of Business at Queen’s University. Joining the COC and Game Plan as a founding partner, Smith School of Business will provide world-class business education to up to 1200 active and former athletes over eight years, collaborate on strategic coaching initiatives, and provide customized leadership training for COC staff and partners.

Game Plan’s programs and services, including this Education Network, are being created in collaboration with the program’s presenting partner, Deloitte, which signed an unprecedented 16-year partnership agreement with the COC to ensure its success. Game Plan is also supported by founding partners Smith School of Business, RBC, and Morneau Shepell.

“Flexibility remains an integral decision making factor for our athletes when it comes to education, especially for our winter athletes who must chase snow all-year round to train and compete. This Game Plan Education Network will inspire universities to provide a study plan that works for our high performance athletes so they don’t have to face the difficult choice between pursing an athletic career and getting an education. This launch marks a positive step towards a healthier high performance sport system in Canada.”

“Education is critical to the development of all Canadians, including Canada’s National Team and Paralympic athletes. It is incumbent upon our sport organizations to support our athletes in pursuing their sport and education goals, and the Game Plan Education Network is an exciting step in the right direction. We know athletes who are able to combine high-performance sport with a post-secondary education are well-positioned to contribute positively to their communities in the future.”

“I want to thank the Game Plan Education Network universities for supporting Canada’s high-performance athletes in succeeding in the classroom and on the field of play. Welcoming these universities into the Game Plan Education Network increases the support provided to our country’s top athletes, which already includes education benefits through the Government of Canada’s Athlete Assistance Program, as well as our significant support for Canadian Sport Institutes and Centres across the country. This announcement is another win for our athletes, who are working hard to be today’s champions and tomorrow’s leaders.”

“The creation of the Game Plan Education Network marks a milestone in the support available to Canadian athletes while they are training and competing for Canada on the world stage. The flexibility and accommodation that will be available to student athletes is truly a game changer, making it easier for them to focus on reaching their performance goals both in the classroom and on the podium. On behalf of the Canadian Olympic and Paralympic Sport Institute Network, we are proud to be a part of this Game Plan initiative and of the Game Plan Advisors at our sport institutes and centres working with, and in support of the athletes.”

Debbie Low, CEO and President of Canadian Sport Institute Ontario, on behalf of the COPSI Network

“Being a student and an athlete can have its challenges, but with the support of the Game Plan Education Network I feel more athletes will be able to make the choice to pursue their academic career alongside their athletic career. I have been studying at the University of Calgary and competed at my first Paralympic Games in Rio. I am proud to say that while I continue to train for Tokyo 2020, I will also be pursuing my studies with an Institution of the Game Plan Education Network.”

“Deferring a post-secondary education in pursuit of sport can make career transition difficult for many athletes. Athletes who invest in their education and athletic endeavors concurrently ofnine perform better in both spheres. I would like to thank the first Game Plan Education Network universities for their leadership in bringing this initiative to life and working to enable athletes’ success on and off the field of play. We look forward to including more academic institutions across the country in 2017.”

“As a Game Plan Advisor from the Canadian Olympic and Paralympic Sport Institute Network, education is one of the priorities and we will be working from coast to coast to ensure our athletes can benefit from the opportunities that the Game Plan Education Network is bringing. We will work alongside the various institutions to accommodate athletes and get them as ready as we can for life after sport.”