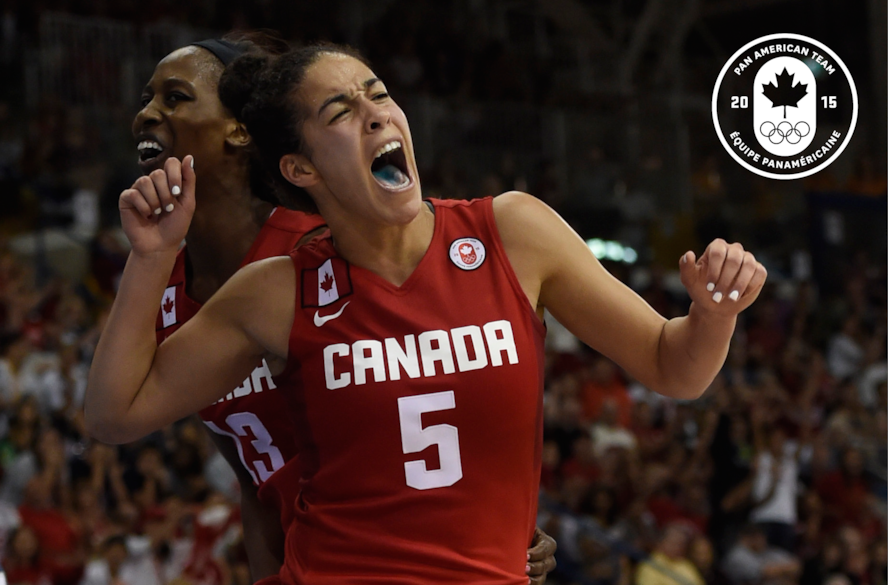 TORONTO — On Sunday, the Canadian Olympic Committee announced that Canada has accomplished its best-ever performance at a Pan American Games, achieving its goal of being in the top two nations in terms of overall medals won, eclipsing their previous record count from Winnipeg 1999 by at least 20 medals. During the conference, it was also announced that women’s basketball gold medallist, Kia Nurse, would be Team Canada’s Flag bearer during the TORONTO 2015 Games closing ceremony.

Kia Nurse was the leading scorer of the women’s gold medal-winning basketball team, averaging 13.6 points per game for a total of 68 points while playing a team-high 128 minutes. She was the star of the gold medal victory over the United States with 33 points. Kia was chosen for her fighting spirit and for how she represents the great success of Canada’s women and team sports at the TORONTO 2015 Games.

By the Numbers: Athletes and Medals

*Includes the medals that are guaranteed but still to be decided in women’s baseball and women’s softball, but not the possible bronze medal in men’s volleyball

Pan Am Records Set by Canadians

The total number of medals won at Guadalajara 2011 (119) was surpassed on Day 8, the halfway mark of the Games

The men’s softball team won its eighth consecutive Pan Am gold medal; no other country has ever won the men’s tournament

Jordan Belchos won Canada’s first-ever Pan Am medal in roller speed skating with his bronze in the 10,000m points race

*Argentina won the Pan Am gold medal which would have earned them the continental Olympic berth, but because they had already qualified for Rio 2016, the spot goes the next-highest placing team from the FIH World League Semi-Final, which was Canada

“The TORONTO 2015 Pan American Games have been a resounding success. Canada reached its goal of being in the top two nations in terms of overall medals won, also achieving our country’s best-ever performance at a Pan Am Games. From outstanding performances by our athletes to fantastic ticket sales and strong public support, to the seamless and safe execution of logistics, these Games have been a reflection of Canada’s aptitude for hosting world-class sporting events. Congratulations to Kia on being named Team Canada’s Closing Ceremony Flag Bearer – her performance at these Games was outstanding and she deserves this great honour.”

“These Games have exceeded Canada’s expectations in every way. Our athletes have given their everything on the field of play, delivering phenomenal performances that launched Canada into the stratosphere. Because of their dedication, hard work and sheer grit, as well as the enthusiastic support of the fans, our country achieved its greatest-ever performance at a Pan Am Games. I could not be more proud of each and every athlete on this Team. Kia represents everything that is great about this team and I know that she will lead us with pride as Flag Bearer at the Closing Ceremony. Congratulations.”

“It is an honour to represent my country and Team as Flag Bearer for the TORONTO 2015 Games Closing Ceremony. I am over the moon with my team’s performance at these Games – a Games where the rest of my fellow athletes delivered outstanding performances. As a collective, we pushed Canada to achieve its best-ever performance at a Pan Am Games and we couldn’t be more proud. I will carry this flag for all my fellow athletes and all of the Canadians who have supported us on this incredible journey.”

About the Canadian Olympic Committee: