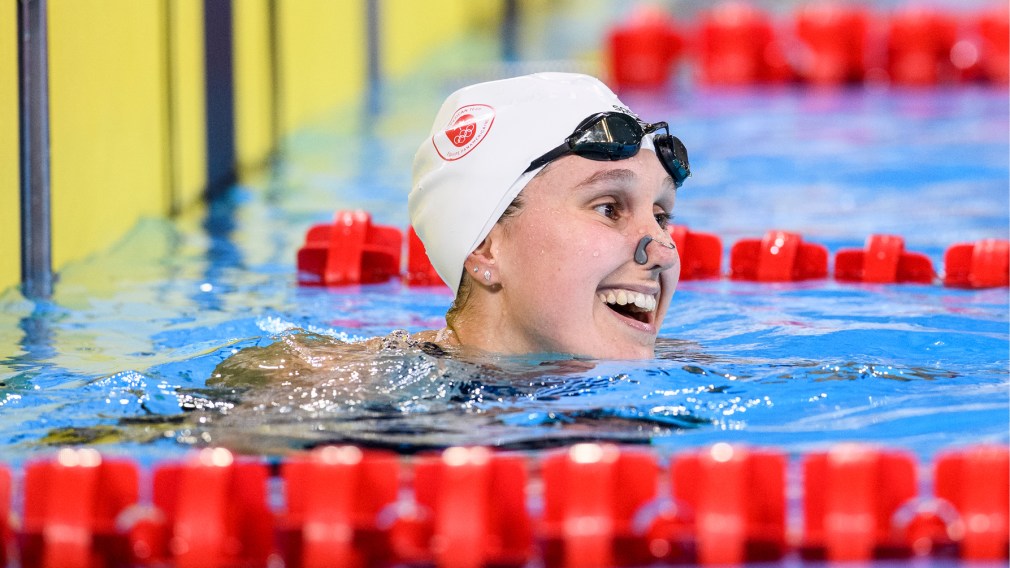 LIMA, PERU – Canada will compete in another equestrian event at Tokyo 2020 thanks to the jumping team, who placed fourth in Lima to secure a quota spot. Though the top three teams are guaranteed an Olympic berth, the USA had already qualified at a previous event, making way for Canada to earn their trip to Tokyo. The Canadian swim team added two to their medal count as Danielle Hanus captured silver in the women’s 100m butterfly and Mackenzie Glover won bronze in the women’s 200m backstroke.

Erynn BALLARD (Equestrian – Jumping Team) on how she and the team handled the pressure knowing what they needed to do for Olympic qualification:

“You have to try to be able to seperate it and just ride for the moment. What happened yesterday doesn’t matter. What happens in the next round doesn’t matter. I just really had to focus on [my horse], the course and me, and I think I was able to do that.”

“It was better than last night [seventh in the 200m butterfly]. I kind of knew I wanted to redeem myself. Last night was not my best performance. You win some and you lose some. Some days do not go your way. I am really happy with it. I need to hold myself to a higher standard but sometimes it is just the way it is and I knew I wanted to come back and do a better job in the 100.”

Damian WARNER (Gold Medalist: Men’s Decathlon) on why he decided to come to Lima to defend his TORONTO 2015 title:

“My experience in 2015 in Toronto was one of the best experiences of my life and obviously, you want to come back here and you want to be able to repeat and win that championship. Again, I think this is a great stepping stone towards the World Championship and Olympics.”

Damian WARNER (Gold Medalist: Men’s Decathlon) on dominating the competition from the start:

“Lucky for me one of my strong events is at the start with the 100m and I followed that up with a good long jump, so I got a good start and did what it took to hold on and get the win. And I get to be on the podium with two really cool guys. I couldn’t think of two guys I’d rather be on the podium with. Two medals for Canada, that’s pretty awesome. For a long time I had to do decathlon almost on my own and now Pierce [LEPAGE, CAN, bronze medalist] is up their too which is great for me and for Canada.”

“I feel tired but overall, I’m super happy that I even finished. Three days ago if you asked me if I was going to compete I would say no. I think getting through, you know, I had a lot of good events and maybe some not great events but it’s a learning experience and this is definitely something that I’ll take away as we’re gearing up for Worlds.”

Crispin DUENAS (Men’s Archery) on the team’s preparation for the Recurve Team event:

“I’m really happy that all the practice we put into this team round format and all the focus that went into this as a group that culminated in this big win over Team USA. The sets we put up together today were the best we’ve posted as a group in a really long time. Hats off to my whole team because now we are going for gold.”

“It would have been nice to have a medal but our goal, our priority was coming down here to qualify for the Olympics so I’m extremely happy, mission accomplished.”

“Unfortunately my last touch, I think it was the right idea. Just the execution was not so good. So right now not too happy, but overall, I’m happy with my result. Last Pan Am Games I finished in the top eight, this is top four so it’s already an improvement and I can take a lot of this. On to the next season, a lot of positives, a few negatives, few things to work on, but it was a good competition for next year, which is when we finish off the Olympic qualifying season.”

“They hugged me after the finish. They’re all here, so we’re celebrating all together. It’s really fun because every time one of us wins, it’s like we all win. It’s a great feeling.”