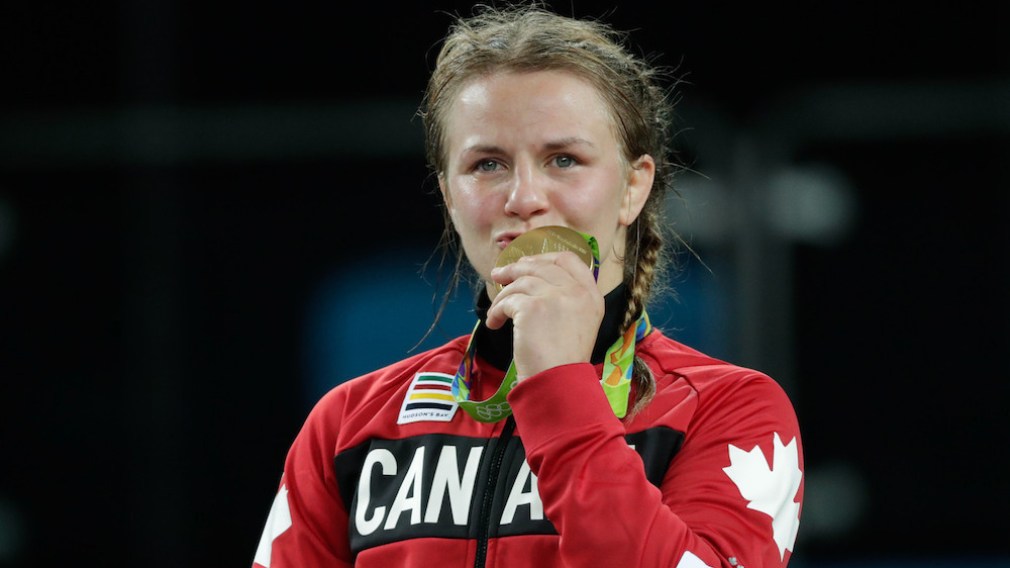 Thursday, August 18, 2016 — RIO DE JANEIRO — Day 13 competition has come to an end. Please find end of day results, quotes and other resources below.

On the performance that qualified her for the final:

“It was way better than preliminaries yesterday and I’m really proud of the way that I managed myself in this competition. I made it through to the finals. I’m really excited and I have nothing to lose now. I’m ready and I just can’t wait to enjoy the moment.”

On diving at an open air pool:

“I train indoors at home, but we have an outdoor pool in Montreal where we trained to prepare for this.”

On her strongest event in the modern pentathlon:

“(Fencing) is usually my best event, and today it was exceptional for me (McCANN finished third). There is a long day tomorrow, so we will see what I can do.”

On going in to tomorrow:

“To go one, one, two the first day is pretty much as good as it could have gone almost. So (I’m) definitely stoked and ready for tomorrow. Every race day is different. I’m just doing the best I can and I had a ton of fun today.”

On her improved performance:

“It was a much better day today. I felt better right off the bat. I was two-under through my first nine holes which was good and I was hoping to get a few more birdies on the back nine and I definitely was able to do that.”

“I kind of got momentum and then putts streamed for me and I was able to hit some really good shots.”

On whether she fights with her caddy, who is her sister:

“No. We’re pretty good. She’s my best friend, my sister, and she happens to be my caddy as well, so it works out really well. We better not get into any arguments because we’re together 24/7 – so, so far, so good.”

On the change in conditions from round one:

“It seemed a little bit softer today and not quite as windy as I experienced yesterday. Other than five holes yesterday, I played awesome. Today, 18 holes were just a little bit more steady. I hit more fairways, I hit more greens, just kind of played a little bit smarter when I could and I tried to make something happen.”

On a break before the Olympic Games being ideal preparation:

“I took a couple days and I kind of just hung out at my cottage. Then I also worked really hard the last few weeks to get my game back to where I knew it could be.”

“The weeks that I wasn’t playing very well I wasn’t far away from being really good, it was just a few small things that I think I had to figure out.”

On finishing sixth in the final:

“I just wanted to do my dives really well. I did beyond what I expected, except for my fourth dive. In general, I’m extremely proud of what we have accomplished.”

On her show of emotions after the final dive:

“This is my last Olympics. I had an amazing career. I’m really proud of how I managed the strong event tonight.”

On her synchronised diving partner Meaghan BENFEITO (CAN) winning the bronze medal:

“It’s amazing. It’s another medal for diving and for Canada. She worked so hard for this, so she deserves all of the success she’s having right now.”

“I was a training partner in London (2012 Olympic Games) and I snuck up onto the mats to see what it was like and it was like the same mats that I trained on everyday. I knew I could be there in four years. It hasn’t been easy, but it is amazing.”

On the final match:

On winning the gold:

“I was just trying to see if it would sink in finally. It doesn’t ever sink in maybe? I woke up and I was a random person and an everyday girl and work hard everyday.”

“Everyone dreams about singing the national anthem and watching their flag raised but you can’t use words to describe (it).”

On her Olympics build-up:

“The process to get here today was so hard but when I woke up this morning I knew that I had done every single thing I could to wrestle my best today.

“I was really doubting myself last year and I knew I had it in me. I knew I could compete with everybody in the world.

“I just wrestled like I knew I could and you see what happened.”

On negotiating a difficult semifinal and qualifying for the final:

“It was messy out there, you need to make the other girls aware that you’re there. But it’s good, I’m through. It’s important to just run my own race.”

On his pride at winning a medal:

“It feels awesome. I came here with mindset of gold but there are a lot of tough competitors out there in decathlon. I am proud of myself. I feel like the luckiest athlete in the world. I would not be here without my coaches, family and friends. They made me who I am, an Olympic bronze medallist.”

On how it feels:

“It was a great performance today to come away with the silver medal in my first Olympics. It was tough racing against Usain (BOLT, JAM). It was a learning experience from yesterday.”

On how the race played out:

“I just didn’t have enough coming home but I’m going to learn from that. I love competing against him. It has been an honour being a part of history with what he’s accomplished.”

“Overall, if his time is up a new person has to come in there. I have to continue to work hard and bring my A game because it’s not going to be easy.”

A full Day 14 schedule for Team Canada is now available for download.