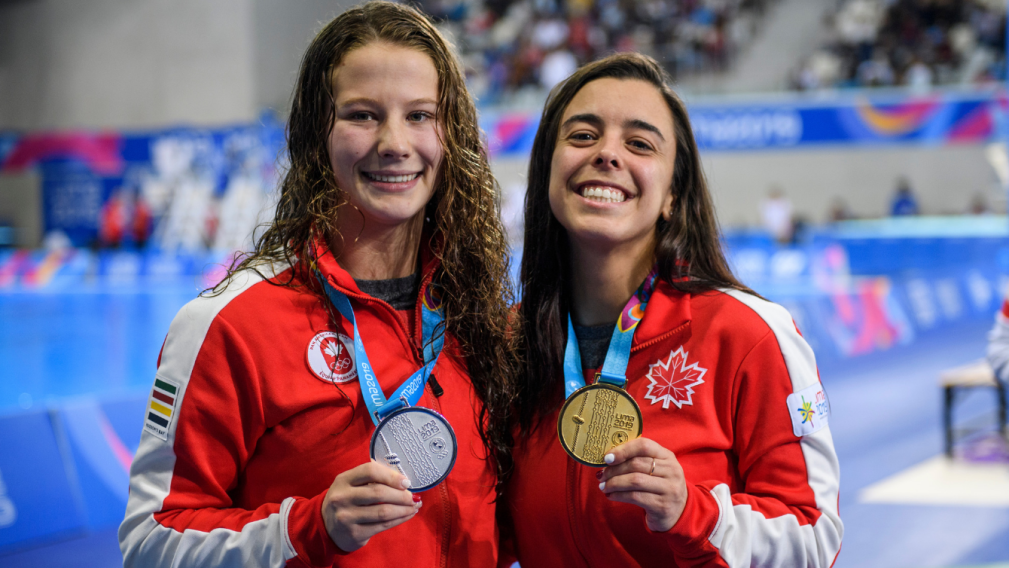 LIMA, PERU – Canada finished a quiet Day 8 with three strong performances in diving, winning gold and silver in the women’s 10m platform, and silver in the men’s 3m synchronized springboard. Next generation athletes continue to shine as Caeli McKay wins her first-ever Pan American Games medal and Kelsey Mitchell captures a new Pan American Games record in the 200m sprint (track cycling) qualifying round, only one year into competing in cycling.

DAY 8 QUOTES OF THE DAY:

Meaghan BENFEITO (Gold Medalist: Diving – Women’s 10m platform) on how it feels to compete in her final Pan Am Games:

“It feels amazing. Like I said, it’s the first time I won the individual. I have two bronze medals in the two past Games in 2011 and 2015 so it’s nice to finally get on top. I knew I was able, yes, I was injured the past couple months, but it’s been going a lot better. Obviously still not where I want to be. But just to leave on top is amazing and to finish off this day with a gold medal I can’t ask for more”

“[Caeli] makes me nervous. She did the same thing at Nationals. I absolutely needed an amazing dive on my last dive and I had to beat her score, like Caeli you need to be on my side. But it’s amazing because she helps me as an individual diver and as a synchronized diver. Makes me jump higher, makes me work harder. That’s one thing I really appreciate about her. I mean, I couldn’t have missed anything if I wanted to win, she wasn’t going to just hand it to me so I think that’s something that I appreciate.”

“It’s a great feeling. I mean, I wasn’t expecting this. There’s a lot of pressure. This event was really really strong and everybody was diving at their best. On the fourth dive, I don’t usually look at the scoreboard but I knew where I was standing and that put a lot of pressure on me as I knew I had to put my dive down. But I mean, overall, I’m really proud of myself, especially how far I’ve come this year individually. This is just the cherry on top.”

Caeli McKAY (Silver Medalist: Diving – Women’s 10m platform) on being a next generation athlete, competing at a multi-sports Game and delivering on the road to Tokyo:

“It’s such a different atmosphere being in a Games rather than just a diving competition. Having the support of all of Canada, it’s not just the diving team that’s supporting us, it’s the whole team. And it’s a lot more pressure and it doesn’t matter that the rest of the world isn’t here. The divers here are actually some of my toughest competitors. Having that support and being able to perform under that pressure leading up to Tokyo, it’s also a stepping stone in my learning.”

“The fastest I have gone in competition is 11.0 and I wasn’t doing my best times in training this week, so I was really happy to look up and see the 10.89. To be honest, I didn’t expect to go that fast but I’m feeling strong and I’m ready for tomorrow.”

Q. Name the only two Canadians to win gold at a Pan American Winter Games.