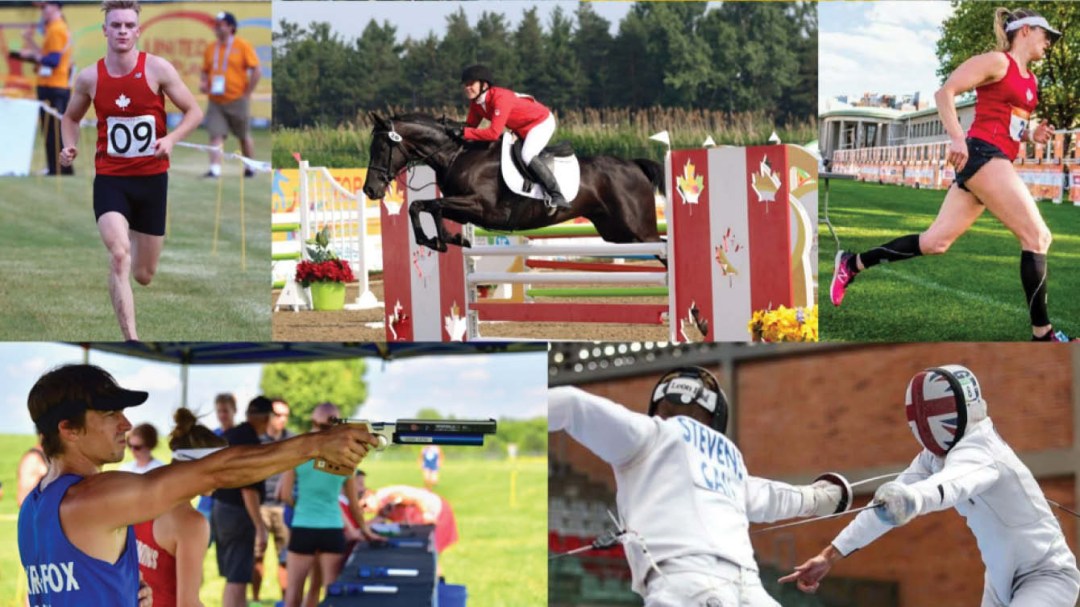 Pan Am Games to feature two individual events (men and women) and the debut of three relay team events (men, women and mixed)

TORONTO (June 27, 2019) – Pentathlon Canada and the Canadian Olympic Committee are excited to name a team of five athletes to compete in the modern pentathlon individual and relay events at the Lima 2019 Pan American Games.

The individual competitions at Lima 2019 will serve as a direct continental qualifier for the Tokyo 2020 Olympic Games. In addition, Lima 2019 will feature pentathlon relay events for the first time in Pan American Games history. These two-member team events include a men’s team, a women’s team and a mixed team which take place following the individual events. The addition of the relay events brings the total number of medals available in modern pentathlon to 15, a significant increase over the total of six that were available at TORONTO 2015.

Team Canada has a long history of top results and Olympic qualifications in modern pentathlon at the Pan American Games. Most recently, at TORONTO 2015, Donna Vakalis qualified for Rio 2016 with her fifth-place finish.

After a thrilling selection season consisting of multiple international competitions, three women and two men earned places on the team. The five pentathletes on the Lima 2019 team, in alphabetical order, are:

Saskatoon native Shauna Biddulph is delighted to be heading to Lima just 10 months after returning to the sport from an extended break to have her daughter Abigail. Shauna is a four-time Alberta provincial champion and a two-time national championship runner-up, including at the 2019 Canadian National Championships. She has a B.Sc. in toxicology and works as a professional barn manager and rider in Calgary, Alberta.

Kelly Fitzsimmons is a three-time national champion, collecting her most recent title in May 2019, and the most experienced international competitor on the team. She has earned a bronze medal at the world championships in the pentathlon sub-sport of triathle, a team bronze at the Pan American Championships in 2017 and has competed at numerous World Cups and world championships. Originally from Calgary, Fitzsimmons now calls Toronto home and puts her B. Comm. degree to work as a product strategist.

Claire Samulak hails from tiny Fruitvale, B.C. but moved to Calgary to train in pentathlon. She credits her father with sparking her interest in the sport. A professional equestrian groom, Samulak has three horses of her own and enjoys playing the guitar.

Joel Riker-Fox was introduced to modern pentathlon through his childhood membership in the Pony Club in Delacour, Alta. While Joel first turned his competitive interests to triathlon, he watched his older brother, Joshua, represent Canada internationally in pentathlon for many years, including at the Beijing 2008 Olympic Games. Riker-Fox operates his own business as a sound and stage designer for events throughout Alberta.

Garnett Stevens also came through the Pony Club pipeline, competing on family horses in the Pony Club sport of tetrathlon. His followed his older sister, Mathea, into pentathlon and began his international career in 2015, qualifying for TORONTO 2015 Pan Am Games, where he finished 13th. When not training, Garnett is pursuing his degree at the University of Ottawa.

Modern Pentathlon, a Core Olympic sport, is the only sport created specifically for the Olympics. It was developed by the founder of the modern Olympics, Baron Pierre von Coubertin, as the ultimate skill-and-strength test of a soldier. The sport debuted at the 1912 Stockholm Olympics and has featured in every subsequent edition of the Games. The women’s competition was added in 2000. This is still the most varied and demanding multisport test in the Olympic family.

What does a Modern Pentathlete do?

Modern pentathletes compete in five sports: one-touch épée fencing, 200-metre freestyle swimming, equestrian show-jumping and a final combined laser pistol shooting and running event (referred to as Laser Run). The final Laser Run event is incredibly exciting. Athletes are seeded in order of their total points accumulated from the three previous sports with the number of seconds each athlete starts after the highest ranked competitor determined by their points difference. Following a short burst run to the laser targets, the athlete must complete five shots on the target’s bullseye within 50 seconds. Next comes an 800-metre run. After three more Laser Run legs, the first athlete crossing the finish line wins. The relay events (men, women and mixed) include all five sports but are adjusted for teams of two.