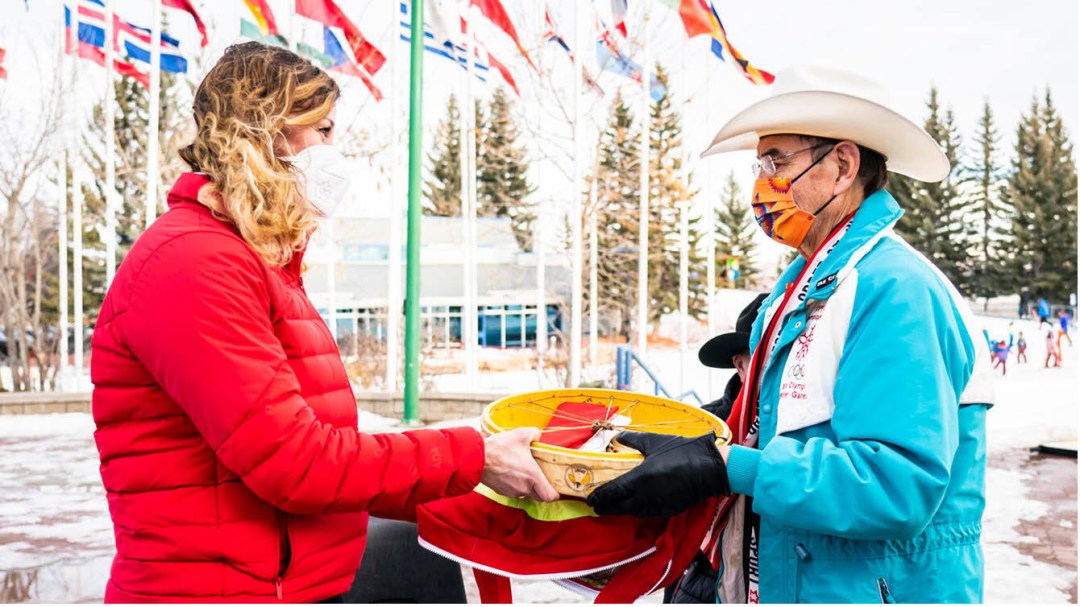 The drum was presented by Chief Wilton Littlechild, International Chief on Treaties Six, Seven, and Eight, during a private ceremony held outdoors at WinSport in Calgary, Alta. on January 15. Elder Patrick Lightening from Treaty Six Territory performed a travelling song during the ceremony.

“It is our great honour to transfer this sacred drum from Maskwacis Cree Nation to Team Canada and to Chef de Mission Catriona Le May Doan,” said Chief Littlechild. “As a former Winter Olympics Ambassador, I am so proud of all of you on Team Canada and wish you all the best and are behind you, in full support in the joy of effort and success. The drum beat is the heartbeat of Mother Earth and it always brings us together much like the power of sport and the Olympic Games. Let the heartbeat of Mother Earth inspire all of Team Kakanatak. May our Creator, Great Spirit, watch, bless and guide you as you lead our country and thank you for acknowledging this is an act of Reconciliation.”

Treaty Six Elder Patrick Lightening sung a travelling prayer song in the four directions during the ceremony, symbolizing how the Olympics call people together from all points of Mother Earth.

This past summer, Tewanee Joseph and his family, conducted a special Coast Salish witness ceremony to present a custom made drum for Team Canada’s Tokyo 2020 Chef de Mission Marnie McBean. The drum was created to celebrate the athletes competing in Tokyo.

“We were all so inspired by Marnie’s initiative last year and I had hoped to have been presented the honour as well,” said Le May Doan. “I am so thankful to Chief Littlechild and Elder Patrick Lightening for the emotional ceremony that was conducted. This drum will be coming with me everywhere in Beijing and will be an inspiration to the athletes as it symbolizes our connection to Indigenous communities.. It will truly be the heartbeat of Team Canada and connect us all.”

Some features of the drum as described by Chief Littlechild:

The four pegs we chose that usually close the teepee are significant in two ways. The colours represent the elements of life: blue for the waters, green for the medicine grasses, gold represents the sun and red is for the fire. Secondly they also symbolize the principles of leadership: honesty, kindness, sharing and strength. I believe these are appropriate for athletes, and leaders, and especially the Chef de Mission of Team Canada.

The four teachings are: honesty, kindness, sharing and strength. The Maskwa (bear) spirit tells us about family (team), courage, strength, trust and faith. These are what is embedded in the World Indiginous Nations Sport logo on the drum.