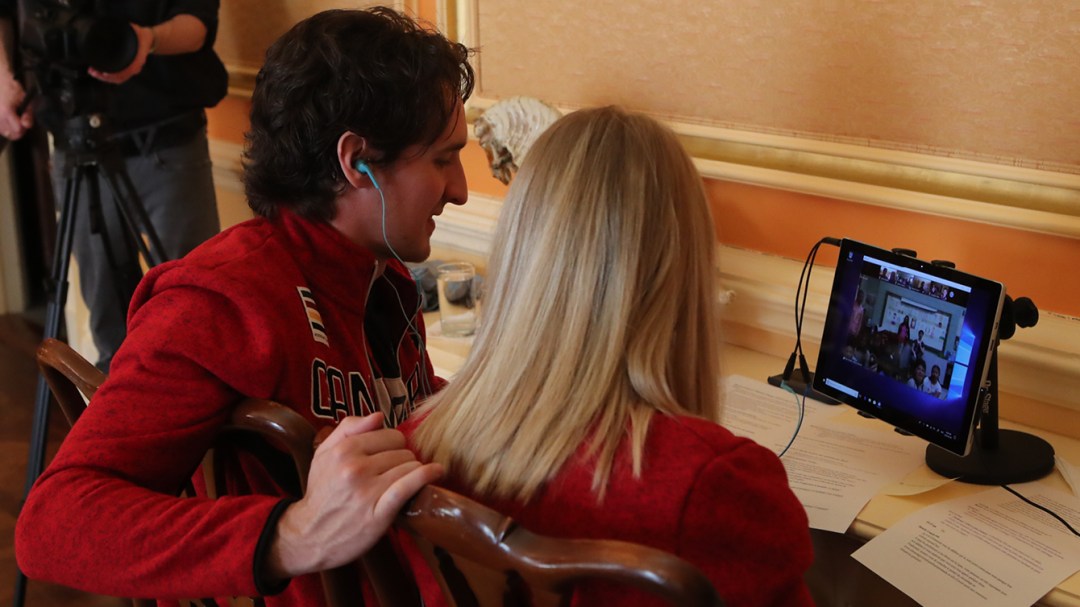 Success of past chats hosted by the Canadian Olympic School Program and Classroom Champions has caught the attention of active and retired athletes who understand the positive impact this connection has on students. This year, Olympic and Paralympic champions, Tessa Virtue and Benoît Huot, have joined to host the chats.

“I am simply thrilled to be part of the Team Canada Champion Chats program! The social emotional learning curriculums encourage the development of invaluable skills for students, highlighted by the connection to athletes and punctuated with corresponding activities,” said Tessa Virtue. “With an emphasis on goal setting, mental wellness, inclusion, and perseverance, it is a unique opportunity to facilitate success for the next generation by building connections and improving sport participation! I am inspired by Classroom Champions as an organization, and am grateful for the chance to be involved in a meaningful way.”

The content, available on championchats.olympic.ca, will feature three rounds of four-week video lessons from Canadian athletes that are aligned with Canada’s school curriculum and will equip teachers with lesson plans and worksheets to use in class. Each four-week curriculum will culminate in a massive nation-wide live chat, giving communities the chance to connect directly with Olympic and Paralympic athletes.

“It’s so exciting to be part of this unique and inspiring program, which is truly a groundbreaking partnership between the Canadian Olympic Committee and Canadian Paralympic Committee, and I definitely plan on bringing the voice of the Paralympic Movement into the conversation,” said Benoît Huot. “This is such a great opportunity for our athletes to connect with students across the country, and to share the message that sport is for everyone, sport is inclusive, sport is for people of all abilities. I think we can make a real difference in the lives of children and show them what is possible through our stories and experiences.”

The virtual live chats will be hosted from unique locations across Canada, and will include a chat during the Olympic and Paralympic Games Tokyo 2020, providing communities an unforgettable experience. At the Olympic Winter Games PyeongChang 2018, Canadian Olympians delivered a live chat from Canada Olympic House, sharing the unifying power of the Olympic Games and connecting with over 250,000 students in schools across Canada.

“Classroom Champions is excited to partner with the Canadian Olympic Committee, Canadian Paralympic Committee, and truly inspiring Olympic and Paralympic athletes for this year’s Team Canada Champion Chats,” says Steve Mesler, Founder and CEO of Classroom Champions. “We know how impactful it is for students to hear from athletes about experiences training, failing, bouncing back and competing – and who best to share those lessons than Canada’s best! We are excited for these athlete ambassadors and our amazing hosts Tessa Virtue and Benoît Huot to empower kids to Be A Champion in and out of the classroom.”

For their work in educating Canadian youth, the Canadian Olympic Committee presented the 2018 International Olympic Committee Trophy for Olympism in Action to Classroom Champions. They were recognized for connecting underserved students with world-class athlete mentors to support student mental health, wellness, and academic achievement.