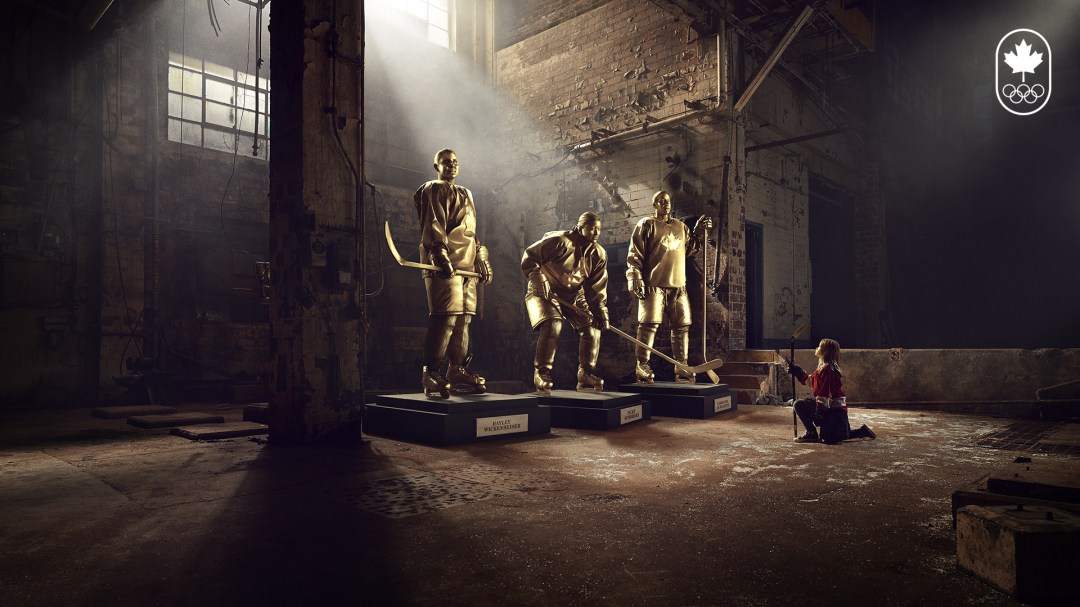 TORONTO (January 23, 2018) – The Canadian Olympic Committee (COC) unveiled a new brand platform today that celebrates its athletes and highlights our shared values while challenging Canadians to think about what it means to ‘Be Olympic’.

DOWNLOAD: Creative assets from the ‘Virtue & Victory’ campaign for editorial use

The campaign features a number of highly cinematic short films based on athlete stories and insights (including 10, 30 and 60-second spots), as well as a host of other innovative narrative elements, including digital video content, out of home advertising, print stories, and social media tactics.

At the center of this new campaign is a beautifully shot, stylized, dreamlike, and powerful TV spot entitled “Virtue and Victory” introducing the stories of Canadian athletes that exemplify both Canadian and Olympic values. The spot features Olympians Denny Morrison (long track speed skating), Chloé, Maxime and Justine Dufour-Lapointe (freestyle skiing), Eric Radford and Meagan Duhamel (figure skating), Mark McMorris (snowboard), Hayley Wickenheiser, Vicky Sunohara and Caroline Ouellette (ice hockey). The TV spot ends with a call to action for Canadians to learn more about the athlete stories, and visit additional materials like a look behind the scenes and more photography at http://www.beolympic.ca.

“We wanted to shine a light on moments in our athletes’ stories that showcase the best of us – values that define what it means to be Canadian and to be Olympic,” said Derek Kent, COC Chief Marketing Officer. “In doing this, we honour their dedication and their journey. We want to encourage Canadians to dig deeper and be inspired by our Olympians’ incredible passion for sport. Inspired by their values of determination, unity and resilience.”

The eight-week campaign comes on the heels of a tease phase that has seen Team Canada social media channels highlighting Be Olympic stories as part of a 100-Day Countdown to the upcoming Games in PyeongChang. The Virtue & Victory ad features vignettes of each athlete story showcasing their values:

“Defining what it means to Be Olympic represents a year’s worth of insight work and careful thought and consideration,” said Colin Freeman, Senior Manager, Brand Marketing for the COC. “We are proud of this work and are inviting Canadians to engage and learn more about these incredible stories at beolympic.ca. We had a world class partner to work with in Sid Lee.”

With a partnership that began in late 2016, the COC and Sid Lee have worked to develop a brand platform celebrating Canadian Olympic athletes beyond their medal moments.

Other creative partners include director Ian Pons Jewell, Revolver Films, OMD, North Strategic, Grayson Matthews and Art Jail. The COC would like to thank all of its partners who dedicated extra time and hours for the benefit of Team Canada.

“Playing for Team Canada is one the greatest honours for any athlete. Every time you put on the maple leaf, you are representing Canadians and Canadian values. As Canadians, we have a duty to be leaders within the Olympic Movement and encourage all athletes to Be Olympic.”

“This platform gave us the opportunity to re-envision what it means for athletes and all Canadians to Be Olympic. With this particular campaign, we wanted to illuminate some of this country’s most courageous athletes and tell their stories in a thought-provoking way. We hope this ad campaign starts a conversation about our shared values as Canadians.”

“I had been through so much with the motorcycle collision and stroke that I felt highlighting the struggles of Olympians as something bigger than just winning medals was a refreshing perspective on the Olympics that everyone can relate to in their own way. Seeing that creative vision come to life through the campaign really captures what I believe is the true spirit of the Olympic Movement: We can all aspire to be better in our everyday lives. That’s what Be Olympic means to me and that’s what Be Olympic means to my comeback.”

“Wow! This campaign is really powerful. I just love it! I feel very proud to have participated in this campaign, which brings together several outstanding athletes from their sport, but also gives us the opportunity to represent the entire Canadian team. I see all the possibilities that are presented before the little girl as she gazes up at the three golden statues of former players with determination and admiration. Be Olympic gives me pride in representing Canada and inspires all of us to excel and achieve standards of excellence, whether we are an athlete or not.”