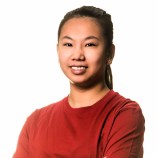 Anqi Luo is a table tennis phenom. She made her Commonwealth Games debut in 2010 as the youngest athlete from any country at age 14. Just two months after her 15th birthday, she was the youngest member of the entire Canadian team at the 2011 Pan Am Games. After making her world championship debut in 2013, Luo had a career breakthrough in 2014 when she won the doubles bronze medal with Mo Zhang at the Commonwealth Games. It was Canada’s third ever Commonwealth Games table tennis medal and first since 2002.  A couple of weeks later, Luo was in Nanjing as Canada’s first table tennis player to qualify for the Youth Olympic Games. Motivated by her goal to show that Canada can have international success, Luo is inspired by her coach and mother for her never give up attitude.

Family: Parents Yong Qiang Luo and Junya Chen… Her mother is a former Chinese national team member and current Canadian women’s team coach… Her father played table tennis in China for his provincial team… Moved to Canada in 2005 so she could grow up in a more relaxed and low pressure environment… Getting into the Sport: Started playing as a hobby at age 8 because she didn’t have a lot of school homework… Soon realized the technique, precision and strong mental game that is needed on every rally… Outside Interests: Enjoys watching movies and shopping… 2015 graduate of Streetsville Secondary School, French Immersion… Odds and Ends: Collects magnets … Travels with her stuffed animals… Colour of shirt in which she wins her first match becomes her lucky colour for the rest of the tournament…

Favourite motto: “If you fall, you get back up. That’s what life is about”…