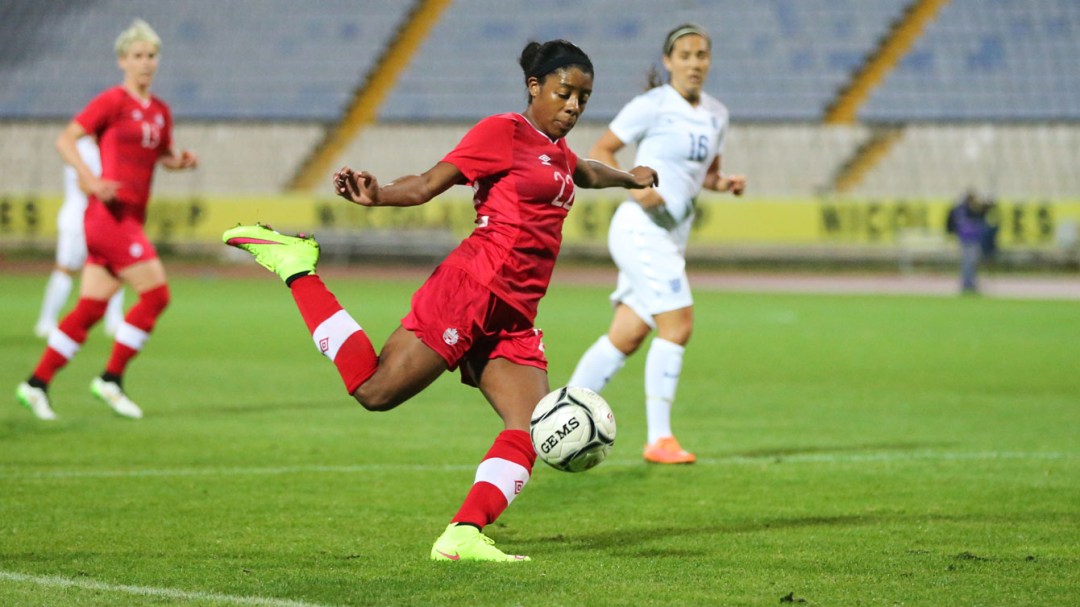 Ashley Lawrence was a key contributor to Canada’s gold medal at Tokyo 2020. She started all six of Canada’s matches and played fulltime in four of them. She assisted on Adriana Leon’s goal against Great Britain in the preliminary round and scored in the penalty shootout against Brazil in the quarterfinal.

Lawrence captained Canada’s under-17 teams at the CONCACAF Championship and FIFA Women’s World Cup in 2012 after representing Canada at the 2010 FIFA U-17 World Cup as a 15 year old. She was twice named the under-17 Canadian Player of the Year (2011-12).

With the senior team, she has a pair of silver medals from the Cyprus Cup in 2013 and 2015. She scored one goal during Canada’s quarterfinal run at the 2015 FIFA Women’s World Cup on home soil and was then part of Canada’s fourth place finish at the Pan Am Games in Toronto. Lawrence notched a hat trick against Guyana during the CONCACAF Olympic Qualifier where Canada finished second to earn a spot in Rio. She was named to the Best XI at the tournament and then helped the squad win the 2016 Algarve Cup. In her Olympic debut at Rio 2016, Lawrence started five of Canada’s six games, earning an assist on Deanne Rose’s goal that opened the scoring in the bronze medal match against Brazil.

In 2018, Lawrence was part of Canada’s runner-up finish at the CONCACAF Championship which qualified the team for the 2019 FIFA Women’s World Cup. At France 2019, she played every minute of Canada’s four games. During the CONCACAF Olympic Qualifying Tournament in early 2020, Lawrence scored two goals in Canada’s opening 11-0 win over St Kitts and Nevis as they went on to finish second and secure their ticket to Tokyo 2020.

Lawrence playeds collegiately for the University of West Virginia. After turning pro in 2017, she signed with Paris Saint-Germain FC where she won the Coupe de France in 2018. In 2019, she was named Canada Soccer’s Female Player of the Year.

A Little More About Ashley

Getting into the Sport: Started playing soccer at age 5… Grew up participating in swimming, soccer and dancing… Outside Interests: Graduated from West Virginia University in 2016 with a degree in business… Created the Yes She Canada organization to promote and develop women’s soccer… Hosts an event every holiday season to collect toys and canned goods for families in need…  Enjoys reading business books, cooking, dancing, watching movies, and hanging out with friends… Odds and Ends: Favourite motto: “Once you know your purpose, it is the steps you take, in the face of adversity that make it legitimate”… Biggest inspiration has been Christine Sinclair and the admiration has only grown while playing alongside her… Always listens to music and talks to her mom before a game… Always travels with her teddy bear… Nickname: Ash…