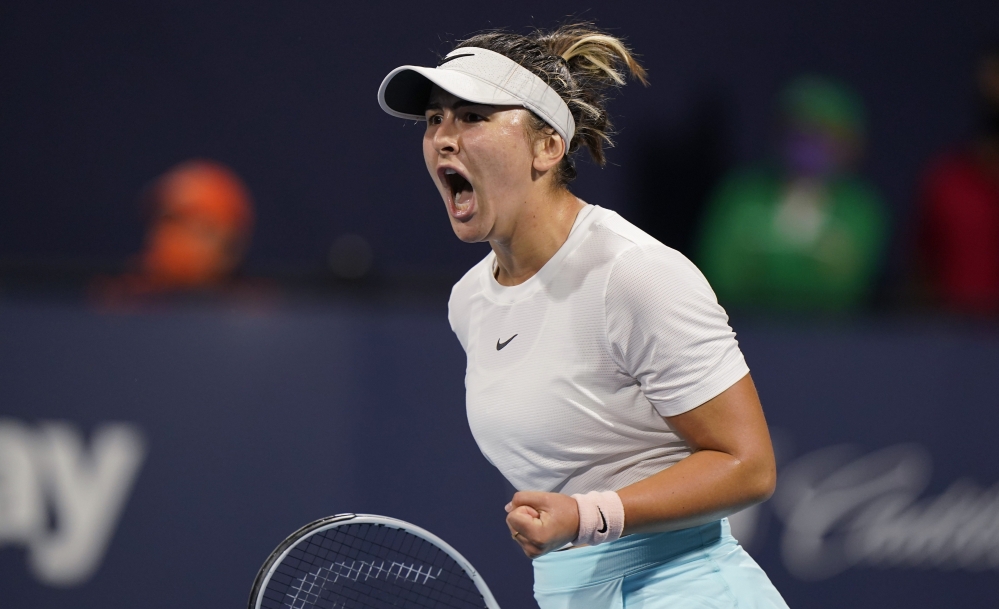 Bianca Andreescu made history at the 2019 U.S. Open when she became Canada’s first ever Grand Slam singles champion. She defeated Serena Williams in straight sets in the final to become the first player to win the singles title at the U.S. Open in their first appearance in the main draw at that Grand Slam. The win moved her into the top-five in the WTA rankings.

That victory was the highlight of a breakout year for Andreescu. She had made the final at the first WTA event of 2019 in Auckland, defeating top seed and world No. 3 Caroline Wozniacki in the Round of 16. After making it through qualifying, she made her main draw debut at the Australian Open and won her first career Grand Slam match. She finished off January by winning a WTA 125 title at the Oracle Challenger Series in Newport Beach and moving into the top-100 in world rankings.

In March, Andreescu defeated five seeded players, including Angelique Kerber in the final, to win the WTA 1000 event at Indian Wells. She became the first wild card to win the women’s title in tournament history and the first 18-year-old champion of the event since Serena Williams in 1999. She then unfortunately suffered a shoulder injury at the Miami Open that kept her out for most of five months, though she attempted a return at the French Open but withdrew after winning her opening match.

She made a triumphant return at the 2019 Canadian Open, winning her second WTA 1000 title and becoming the first Canadian to win the home tournament since 1969. She defeated three top-10 opponents on the way to the title, including Serena Williams who retired in the final with back spasms.

After the U.S. Open, Andreescu reached the quarterfinals of the China Open where she lost to Naomi Osaka, ending a win streak of 17 consecutive matches. It was her first loss in 2019 to a top-10 opponent. She made it to the WTA Finals for the first time, but retired from the group stage due to a left knee injury. For her efforts on the season, Andreescu won the 2019 Lou Marsh Trophy as Canada’s athlete of the year, the Bobbie Rosenfeld Award as Canada’s female athlete of the year, and the WTA Newcomer of the Year.

Andreescu was unable to compete in 2020, withdrawing from the Australian Open because of continuing issues with her knee. When tournaments resumed in the fall after a hiatus because of the COVID-19 pandemic, Andreescu announced she would miss the rest of the reason to focus on her health and training.

After pulling out of the 2020 Australian Open with a knee injury, Andreescu missed the rest of the season to focus on recovery. She returned in 2021 and reached the final of the Miami Open.

Andreescu joined the ITF circuit in 2015 and won her first title in Gatineau in August 2016. In 2017, she earned two more ITF titles and broke into the top-200 in the WTA singles rankings. She qualified for the main draw at Wimbledon but lost in the first round of her Grand Slam debut. She earned her first career WTA match victory at the Citi Open in Washington and then upset world No. 13 Kristina Mladenovic to advance to the quarterfinals.

A Little More About Bianca

Getting into the Sport: Started playing tennis at age 7 while living in Romania… Outside Interests: Enjoys spending time with her poodle, Coco… Odds and Ends: Nickname: Bibi…