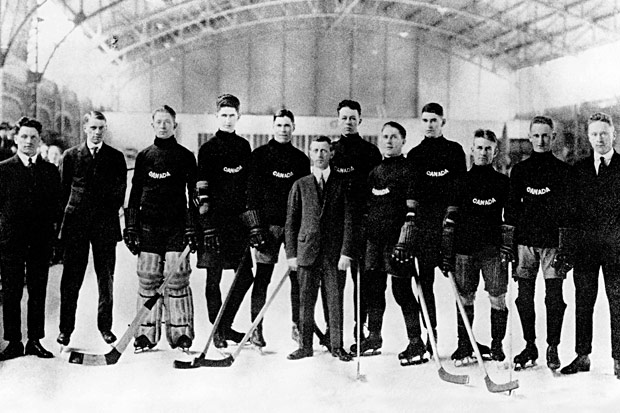 At Antwerp 1920, Bobby Benson played hockey for the gold medal winning Canadian team that was represented by the Winnipeg Falcons who had just defeated the University of Toronto for the Canadian Championships Allan Cup. The invitation to the Olympics came so late that the team left immediately for their trip overseas. Benson played in three games and scored one goal.

After playing a season with the Winnipeg Strathconas, the diminutive defenseman Benson joined the Winnipeg Falcons in 1913, where he would play until 1920. After Antwerp 1920, Benson played with the Saskatoon Crescents, Saskatoon/Moose Jaw Shieks, Calgary Tigers, Moose Jaw Warriors, Minneapolis Miners, Seattle Eskimos and the Hollywood Stars. He played eight games with the Boston Bruins 1924-1925 – his only National Hockey League (NHL) appearance, recording one assist.

Retiring from the game in 1932, Benson remained active in sports playing baseball and coaching hockey during the late 1930s and early 1940s with the San Antonio Muckers, Kenora Thistles (who won the 1940 Manitoba Junior Hockey League championship under his coaching), and the junior Winnipeg Falcons.

Born in Saskatchewan, Benson moved at the age of three with his family to Winnipeg. He married Cassie Gillespie in 1913 and had two children. Following her death, Benson remarried Jean Powell. He served as a member of the 223rd Battalion of the Canadian Expeditionary Force in World War I, where he saw combat, rose to the rank of Lance Corporal, received a shrapnel wound to his knee in 1918, and recuperated at No. 7 Canadian General Hospital at Letreport, France. Benson pursued a career as a carpenter and a contractor and later was a clerk at Timothy Eaton Company until his retirement in 1960.