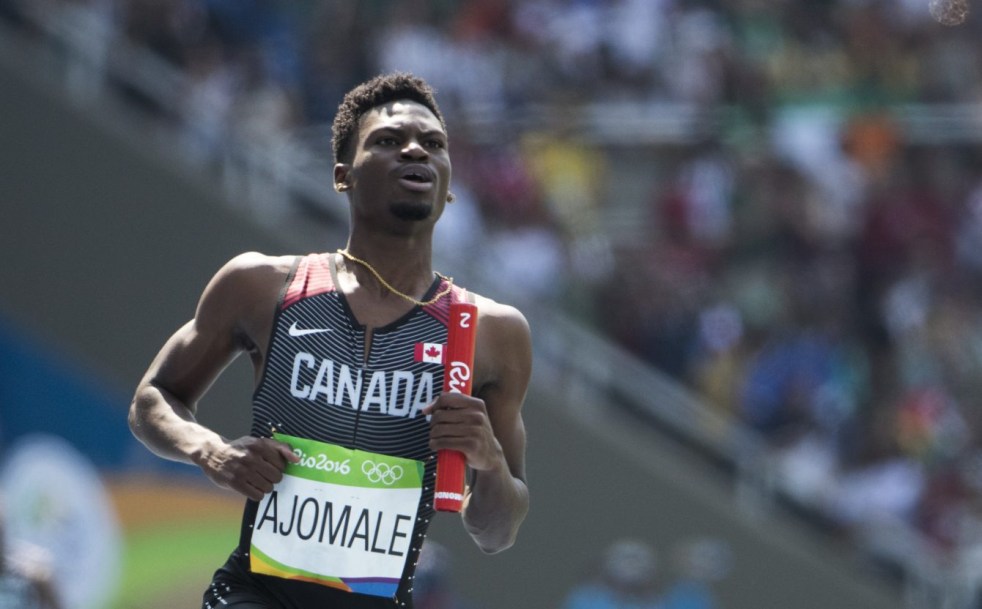 On paper, Bolade Ajomale wasn’t supposed to make the 100m final at the 2016 Canadian Championships. But that’s why the races are actually run. He achieved a personal best 10.15 seconds in the preliminaries, which put him under the Olympic entry standard for the 100m. He went on to finish fourth in the final, earning his way onto the Rio 2016 4x100m relay team.

In Rio, he ran the anchor leg for the relay during the first round heats, helping Canada advance to the final. He then watched as the Canadian men ran a national record time in the final to win the bronze medal, which he would also share.

In June 2021, Ajomale set a wind-assisted personal best in the 100m with a time of 10.07. He earned his spot for Tokyo 2020 a week later with a third-place finish at the Canadian Olympic Trials. Though named to the 4x100m relay pool, he did not compete at Tokyo 2020.

Ajomale ran collegiately for the Academy of Art University in San Francisco. He was a three-time NCAA DII champion in 2018, winning the indoor 60m as well as the 100m and 200m titles. He repeated for the 200m title in 2019. Ajomale represented Canada at the 2015 World University Games, advancing to the semifinals in both the 100m and 200m. He’d previously worn the maple leaf at the 2012 and 2014 IAAF World Junior Championships.

A Little More About Bolade

Getting into the sport: Started running track at age 16… Always knew he was fast from his days as a soccer player… Decided to train seriously after making OFSAA without training… While watching the Canadian 4x100m relay lose the bronze medal at London 2012 after a lane violation he told his mother he would be on the Rio 2016 team… Outside Interests: Enjoys making videos… Majoring in Communications and Media Technologies at the Academy of Art University in San Francisco… Would like to be a sports broadcaster… Has his own podcast called Secrets Like Yours… Odds and Ends: Nicknames: Bo, Bugatti… Has a lucky compass coin… Collects fridge magnets from his travels… Has three playlists for competition days: “morning” for getting up and going, “track” for just before the race, “post” for the cooldown laps and stretching… Favourite quote: “You know what you want and you know how to get it. So what are you waiting for?”…