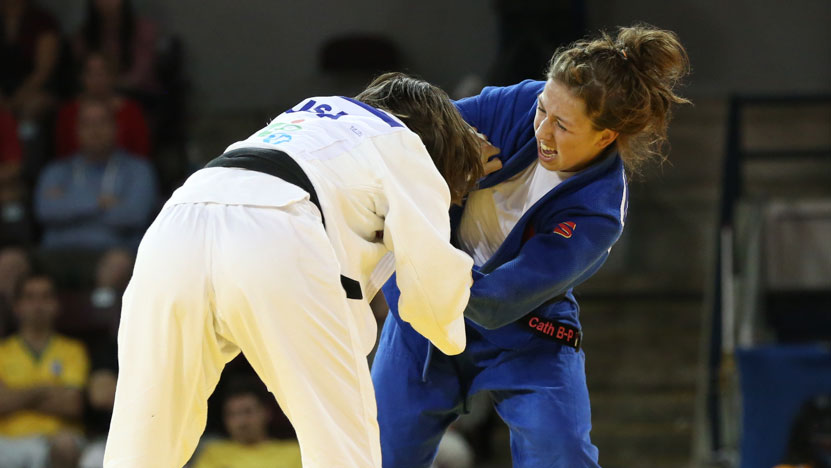 Catherine Beauchemin-Pinard is the only Canadian judoka to win two medals at the IJF World Junior Championships, capturing silver in 2013 and bronze in 2014. She was part of more history at Tokyo 2020 where she won bronze in the 63kg event. That followed the bronze won by Jessica Klimkait in the 57kg event, marking the first time Canada had ever won multiple judo medals at one Olympic Games.

In 2015, Beauchemin-Pinard won the first of her six straight medals at the Pan American Championships. She went on to win silver at the Pan Am Games in Toronto. Later that summer, she posted her career-best finish at the IJF World Championships when she finished fifth.

A silver medal at the 2016 Pan American Championships helped Beauchemin-Pinard book her ticket to Rio where she made her Olympic debut in the 57kg weight class.

Following the 2017 World Championships, Beauchemin-Pinard moved up to the 63kg weight class. She earned her first medal in her new category at the Tashkent Grand Prix in October. In 2018, she earned silver at the Pan American Championships along with three Grand Prix medals.

She started 2019 with five straight top-five finishes, including her first gold at the Pan Am Championships and her first Grand Slam medal in the 63kg weight class in Ekaterinburg. She also won bronze at her hometown Montreal Grand Prix.

In late March 2021, Beauchemin-Pinard earned her second career Grand Slam gold in Tbilisi and added a bronze a week later at the Antalya Grand Slam. With her Olympic spot locked up for Tokyo 2020, she elected to skip the 2021 World Championships to focus on training.

A Little More About Catherine

Getting into the Sport: Started in judo at age 9 and had her first competition when she was 13… Wanted to try judo after reading about Nicolas Gill and how he was bitten by the judo bug… Has wanted to represent Canada since competing in the Quebec Games where she loved the atmosphere around the event… Outside Interests: Would like to pursue a career in accounting… Enjoys yoga, cooking, going to the spa, and being in nature… Odds and Ends: Favourite motto: “If you don’t try, you don’t know”…

Catherine Roberge is the veteran of the Canadian judo team, having competed on the senior international scene for more than...