Chris Mannella has made three appearances with the Men’s National Team, coming in as a substitute in two friendlies against Iceland in January and then being a reserve in a friendly against Guatemala. Mannella currently plays for Toronto FC II in the United Soccer League after serving as captain of the Toronto FC Senior Academy Team. He appeared in 11 matches, scoring two goals and logging 945 minutes in the inaugural League 1 Ontario season. Mannella originally joined the Toronto FC Junior Academy Team in 2009 at the age of 15.

Family: Parents Saverio and Theresa… Sister Stefani and brother John… Getting into the Sport: Started playing soccer at age 5… Wanted to play after watching it on TV… Outside Interests: Enjoys spending time with friends and family, playing video games… Attending the University of Toronto… Odds and Ends: Favourite player is Andrea Pirlo and wants to play just like him… Game day routine includes eating pasta… 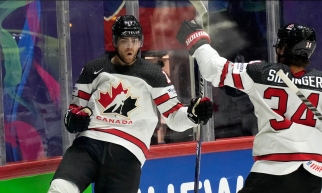 Manuel Aparicio was 19 years old when he made his debut for the Canadian men’s national team in October 2014...

Jackson Farmer made his debut for Canada in 2013 as a substitute with the men’s national team in a friendly...