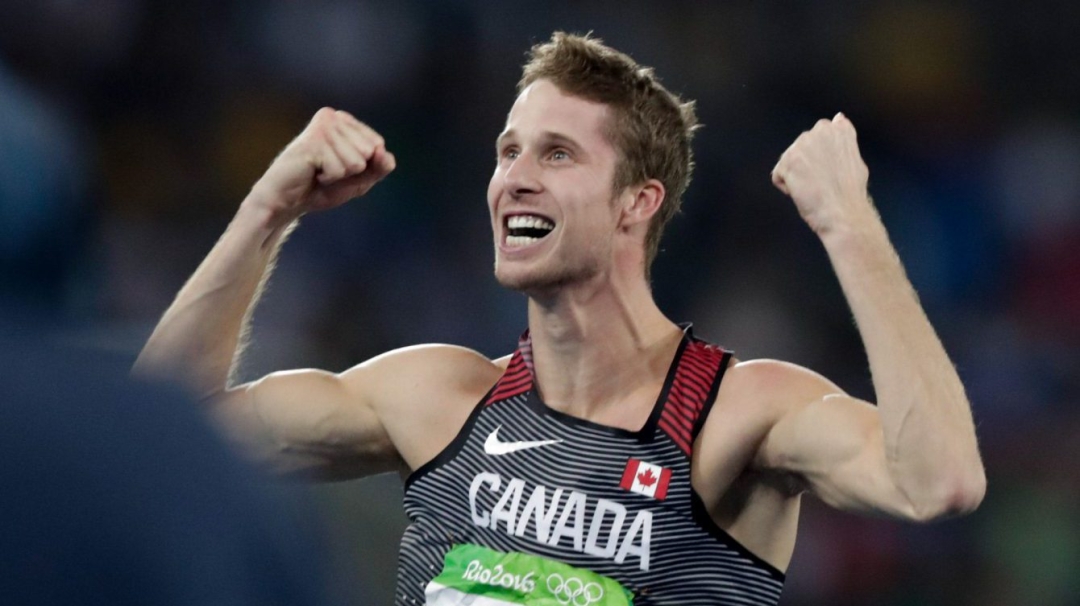 Derek Drouin won high jump gold at Rio 2016 to become Canada’s first Olympic champion in an athletics field event since Duncan McNaughton also won the high jump at Los Angeles 1932. Impressively, Drouin became just the sixth high jumper, male or female, to win Olympic gold without a single missed attempt. He was also the first Canadian track and field athlete to repeat as an Olympic medallist in an individual event since Phil Edwards did so in the 800m at Los Angeles 1932 and Berlin 1936.

Drouin won Canada’s lone athletics medal at London 2012 when he was part of a three-way tie for silver after clearing 2.29m. It was Canada’s first Olympic high jump medal since Greg Joy’s silver at Montreal 1976. For almost a decade, Drouin had been recognized as a bronze medallist, but in November 2021, the IOC confirmed a retroactive disqualification of the athlete who had initially been awarded the gold medal, Ivan Ukhov of Russia, and upgraded Drouin as well as Mutaz Essa Barshim of Qatar and Robert Grabarz of Great Britain to the silver medal behind American Erik Kynard.

Despite it being his Olympic debut, Drouin was not content to just participate, instead taking the attitude of “why not me?” when it came to sizing up the podium contenders. Just a year earlier, he had torn three ligaments in his jumping foot and chipped a bone, requiring him to undergo surgery. Drouin solidified his spot amongst the world’s elite with his bronze medal at the 2013 IAAF World Championships.

He reached a new career high in 2015 when he was crowned world champion just a month after winning gold at the Pan American Games in Toronto. Drouin had previously won gold at the 2014 Commonwealth Games. Earlier in 2014, Drouin broke his own Canadian record with a jump of 2.40m at the Drake Relays, making him one of just 12 men in history to reach that height. The mark had always been a career goal for him, one that if achieved, would tell him he was a real high jumper. In 2013, Drouin had won his record fifth NCAA high jump title while representing Indiana University, for which he was honoured with the Hoosiers’ Best Individual Performance of the Year as well as the school’s Male Athlete of the Year.

Getting into the Sport: Started running track at age 9 but didn’t get into high jump until he was 15, following his sister who was a great high jumper and made it look fun… Before he did it in school, he would set up a high jump in his family’s basement using two large base speakers and a broomstick, which he would raise by stacking books under it, and then jump over it onto the couch; it’s because of this set-up and the way he had to run down the hallway that he still jumps from the left side… Inspired to represent Canada in some sport after watching Simon Whitfield win gold at Sydney 2000 when he was 10… Outside Interests: Graduated from Indiana University in 2013 with a degree in Kinesiology… Enjoys reading, movies, exploring new cities, and playing other sports (hockey, volleyball, golf)… Odds and Ends: Says the closest thing to a good luck charm he’s ever had are the Teddy Grahams he usually has in his bag to snack on during competitions… Nickname: Drouin, D… Always travels with at least one book… Favourite motto: “If not me, who? If not now, when?”…