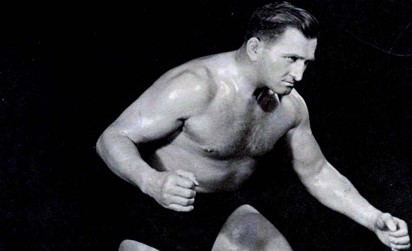 An Amsterdam 1928 Olympian who was Canada’s Opening Ceremony flagbearer, Earl McCready finished tied for sixth in a freestyle heavyweight class, that only had seven entrants. A legend in the wrestling world, McCready was possibly the best amateur wrestler Canada ever produced. The heavyweight gold medalist at the 1930 British Empire Games in Hamilton, McCready also captured four national titles (three Canadian, one American).

McCready was noticed by college scouts when he defeated American wrestler, Charles Strack (Paris 1924 Olympian) at the 1926 Canadian Championships. He accepted a wrestling scholarship to Oklahoma A & M University where he became the first three-time NCAA champion at any weight (1928-30), never losing a bout in his collegiate career going 25-0 (with all but three of his victories by pin). McCready also held the record fastest fall in an NCAA final, pinning Ralph Freese from the University of Kansas in 19 seconds at the very first NCAA wrestling championship in 1928.

Growing up in Amulet, Saskatchewan and later a resident of Aurora, Ontario in the 1940s and 1950s with his wife, to wrestling fans around the world, McCready was known as “The Aurora Farmer”. Allegedly McCready ordered a book on “How to Handle Big Men With Ease” and learned to wrestle from it. He appeared in Britain’s first-ever televised wrestling match in England.

After retiring from amateur competition, McCready had a 28-year professional wrestling career with Stu Hart’s Stampede Wrestling. He held the British Empire professional title and was ranked the second best wrestler in the world by The Ring magazine in 1937 (behind Jim Londos). McCready wrestled his final match at Toronto’s Maple Leaf Gardens in 1958. Life after sport found him running a massage parlour in Edmonds, Washington. In 1966, he lost his left leg to osteomyelitis (had an artificial leg) and in 1983, he died of a heart attack in Seattle, Washington.