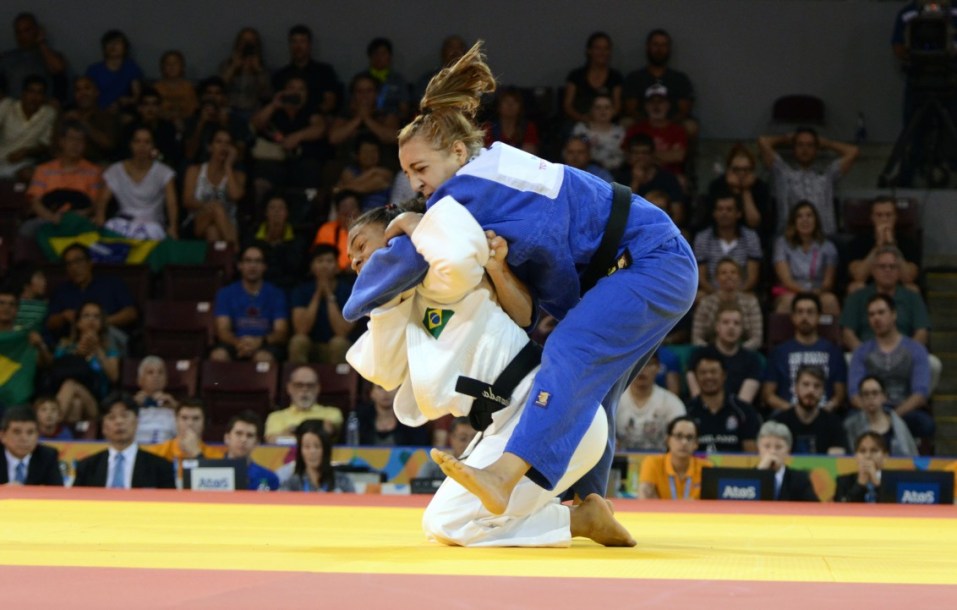 Ecaterina Guica realized how much she wanted to succeed in judo when she competed at her first international event. She won national titles in the U17 (48kg) and U20 (52kg) divisions in 2009 and 2010, respectively, and competed at the IJF Cadet and Junior World Championships in the respective years. She was Canada’s lone judoka at the inaugural Youth Olympic Games in Singapore in 2010.

Guica won her first senior national title in 2013 before winning her first World Cup title that November at the Oceanian Open Apia. In March 2014, she underwent major shoulder reconstruction surgery, which caused her to miss the first six months of the Olympic qualification window for Rio 2016. Returning in the fall, she finished fifth at the Tashkent Grand Prix in October 2014.

Guica reclaimed her Canadian title in 2015 and won gold at the Pan American Open San Salvador before taking home a silver medal from the Pan Am Games in Toronto. Later that summer she made her debut at the senior IJF World Championships and ended the year with her second career World Cup gold medal at the Oceania Open in November.

In 2016, Guica made her first final at the Pan American Championships, which helped secure her spot at Rio 2016 where she finished ninth in her Olympic debut.

In May 2017, Guica earned her career-best finish at a Grand Slam, finishing fifth in Ekaterinburg. In late June, she won her first Grand Prix medal as she finished second in Hohhot. She ended the year with a seventh-place finish at the Tokyo Grand Slam and her first Judo Masters appearance in St. Petersburg.

Guica won her second career Grand Prix medal in August 2018 when she took bronze in Budapest. In her first competition of 2019, she missed the podium at the Pan American Championships for the first time ever. It was a shock and a great disappointment, but she rebounded three weeks later with another Grand Prix bronze against stiffer competition in Hohhot, making that a career highlight. She earned her first ever match victory at the world championships in 2019.

Guica redeemed herself at the Pan Am Championships in 2020, winning her first gold medal at the event. She suffered a hand injury at the Tbilisi Grand Slam in March 2021 but was healthy enough to compete at the world championships where she advanced to the third round for the first time.

A Little More About Ecaterina

Getting into the Sport: Started in judo at age 5 when her father opened a judo club… Her father Catalin was a three-time Romanian champion… She loved being able to share the passion with her dad and sister… Outside Interests: Would like to be a high school math teacher… Studied psychology at Concordia University… Odds and Ends: Favourite quote: “When you focus on the good, the good gets better”… Nickname: Cate… Has a specific pair of socks that she always wears at tournaments for luck… Collects fridge magnets and shot glasses from her travels…

Judoka Kelita Zupancic made her Olympic Games debut in 2012 and finished in ninth place in the women’s 70kg division.