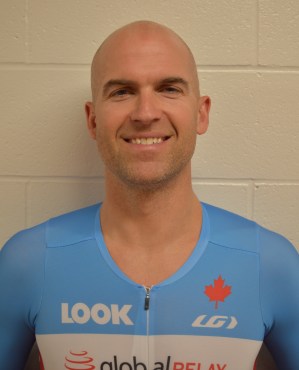 A latecomer to the world of elite racing, Ed Veal is almost twice the age of some of his teammates. But he’s told them he’s not their father, so instead they jokingly call him Uncle Ed. On April 10, 2015 Veal set the Canadian “Hour Record” at the Milton Velodrome, covering 47.59km in 60 minutes. In 2014 he had competed at the Commonwealth Games in Glasgow where he came just short of making the podium as part of the team pursuit. In 2011, Veal attended the Parapan Games in Guadalajara where he rode tandem as the guide for Daniel Chalifour in visually impaired events. Together they won gold in the 4000m individual pursuit and silver in the 1000m time trial on the track and bronzes in the road race and time trial on the road.

Getting into the Sport: Started cycling at age 26, beginning with mountain bike before switching to road in 2006… Got serious about track cycling after Toronto was awarded the 2015 Pan Am Games… Attended an open tryout in fall 2013 for the national men’s track endurance program and made the team at age 37… Outside Interests: Works as a personal trainer and full-time coach for his business, Real Deal Racing… Describes his coaching style as drill sergeant/tough love… Odds and Ends: Favourite motto: “Do something you love – never work a day in your life”… Dedicated to eating clean, including organic foods… Has been nicknamed Real Deal since he was a kid…