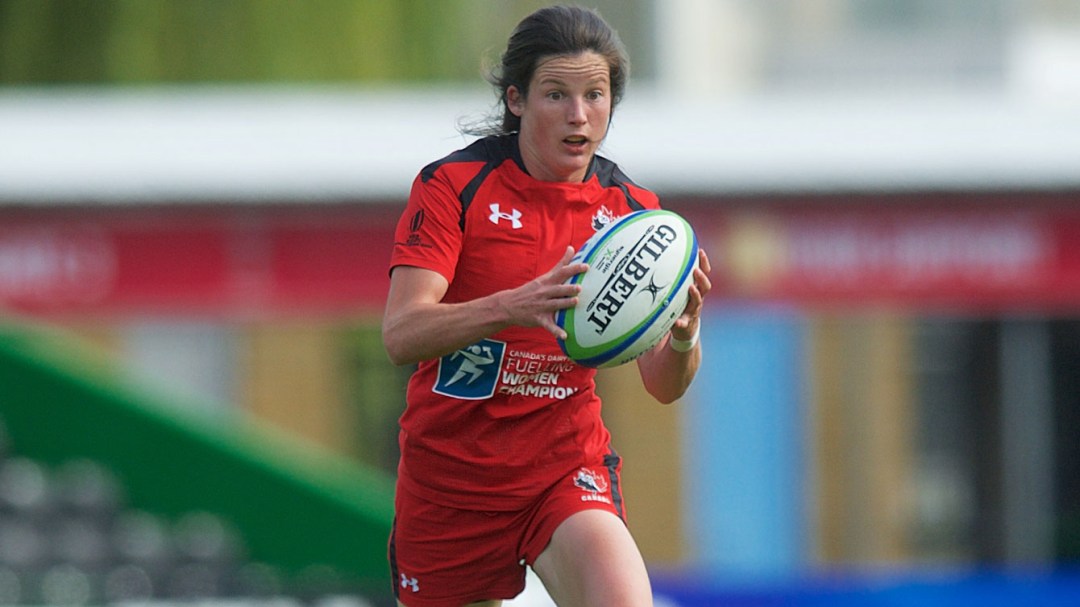 Elissa Alarie has competed for Canada in both rugby 7s and 15s, having first worn the maple leaf as a member of the U19 national union team. She made her debut with the Canadian Sevens team in 2013 for a World Rugby Sevens Series event in China, scoring four tries in just three matches and helping Canada to a third-place finish. Her next appearance on the Sevens Series was the final stop of 2014 in Amsterdam where she added another try and Canada again finished third.

Alarie played in three stops on the Sevens Series in 2015, scoring six tries as Canada had their best-ever Series finish, ending the season second in the overall standings. The result secured Canada’s spot in the inaugural Olympic rugby sevens tournament. Unfortunately, Alarie injured her ACL in the final stop in Amsterdam just a year before Rio 2016. She ended up missing the 2015-16 Sevens Series entirely, which limited her playing opportunities before the Games. She was selected as a reserve for the Olympic team and watched as Canada won bronze.

Alarie’s next cap with the sevens team didn’t come until late 2019 as she played in all five events of the pandemic-shortened 2019-20 Sevens Series. Alarie scored three tries, helping Canada to another third-place finish in the Series standings. Alarie made her Olympic debut at Tokyo 2020, playing in five games.

As a member of the Canadian 15s team, Alarie earned her first senior cap at the 2013 Nations Cup, helping Canada claim their first ever title at the tournament. She also scored the game-winning try over Team USA in the finale of the 2014 CAN-AM Series. She achieved a career highlight later in 2014 at the World Cup, defeating host France in the semifinals to secure Canada’s first ever appearance in the final. Canada would lose to England in the final match, coming away with a silver medal. She made her second World Cup appearance in 2017, helping Canada to a fifth-place finish, with their only loss of the tournament coming against New Zealand in round robin.

A Little More About Elissa

Getting into the Sport: Started playing rugby at age 15… Had never heard the word “rugby” before then but was a quarterback in flag football so was pulled into playing when someone asked who was a good passer… Likes that the sport encompasses the skills from every other sport she played before: speed, agility, intelligence, power, endurance… Outside Interests: Enjoys golf, spikeball, tennis, squash, snowboarding, yoga, card games, and coffee dates with friends… Supports the Terry Fox Foundation by organizing her team’s participation… Also works with the Monty Heald Fund in an effort to eliminate the pay-to-play format for women’s 15s… Graduated from UQTR in 2009 with a Bachelor degree in Accounting… Works parttime for the Canadian Sport Institute Pacific… Odds and Ends: Favourite motto: “35 is the new 21. Could you imagine?”…  Has purple spandex that she often keeps for big games… Collects coffee beans and mugs from her travels…