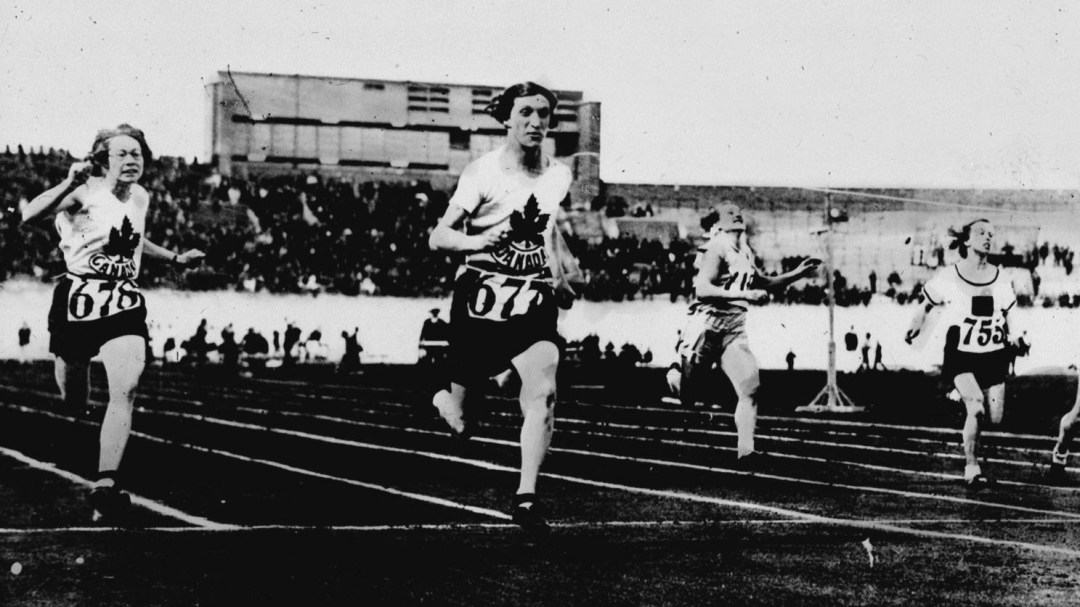 The first time women were allowed to compete in track and field at the Olympic Games was Amsterdam 1928 and the 100m was the first event to be contested. After false starts in the 100m final Bobbie Rosenfeld was beaten to the line by 46 centimetres (18 inches) by American Betty Robinson who had equalled the world record. Rosenfeld ran the lead off leg for the Canadian 4x100m relay team that set an unratified world record of 49.3 seconds in the heats, and in the final when teammate Myrtle Cook took the baton on the last leg with a three metre lead, Canada won in a world record time of 48.4 seconds. Showing her versatility, Rosenfeld entered the 800m only to support Canadian teammate Jean Thompson, but when she fell, Rosenfeld ran up beside her but unselfishly let her finish in fourth, while Rosenfeld finished fifth. Witnesses claim Rosenfeld could have most likely won the bronze medal had she not waited. Dubbed “The Matchless Six” by the Canadian Press, the women of the Canadian Olympic team became national heroes after Amsterdam 1928. The group of Rosenfeld, Myrtle Cook, Jean Thompson, Ethel Catherwood, Jane Bell, and Ethel Smith, lived up to their billing by winning the women’s team athletics’ event (based on total points).

Born in Ukraine, Rosenfeld was moved to Canada with her family as a baby settling Barrie, Ontario. She attended Central School and Barrie Collegiate Institute and then moved to Toronto in 1923 where she was working in a chocolate factory. Rosenfeld starting participating in sports excelling in basketball, ice hockey, softball and track. The beginning of her legendary career was at a picnic where she was persuaded into running the 100 yard dash ultimately defeating the Canadian champion Rosa Grosse and setting a national record. At the 1925 Ontario Ladies Track and Field Championships, Rosenfeld placed first in five events and second in two more. She later would set national records in five different track and field events. Nicknamed “Bobbie’ because of her bobbed haircut, Rosenfeld was not just a star on the track, she was a star on the softball diamond, the basketball court and on the hockey rink, winning major titles everywhere she competed.

A severe attack of arthritis in 1929 kept Rosenfeld bed-ridden for eight months and on crutches for a year afterwards. Once recovered she continued to play hockey and softball but in 1931 her arthritis returned and was forced into athletic retirement in 1933. The next year she was the coach of the Canadian women’s track and field team at the 1934 British Commonwealth Games in London, England. It was 1936 when Rosenfeld started working as a sports journalist for The Globe and Mail newspaper and took her great wit to her column “Feminine Sports Reel” becoming an advocate for women’s sport. Her last column appeared on December 3, 1958 but she continued to work for the newspaper until 1966. The City of Toronto established “Bobbie Rosenfeld Park” in 1991 and Canada Post issued a stamp commemorating her in 1996. Each year, the Canadian Press honours the nation’s top female athlete with the Bobbie Rosenfeld Award.