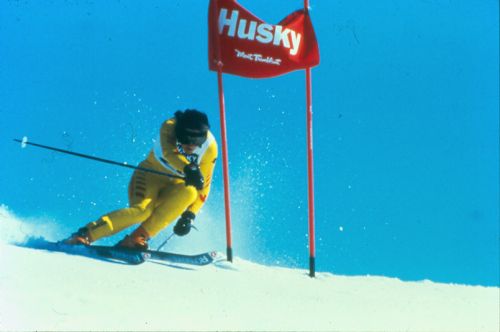 When Canada’s Gerry Sorensen made her one and only Olympic appearance in alpine skiing at Sarajevo 1984, she was already a world champion. A gold medal favourite, she finished tied for sixth with German Marina Kiehl in the Olympic downhill.

In winning the 1982 World Championship downhill title in Schladming, Sorensen became the first Canadian woman to win it since Lucille Wheeler’s victory in 1958. Considered one of the best “gliders” on the World Cup circuit and physically one of the strongest, Sorensen, in her brief yet impressive four seasons on the World Cup circuit from 1981-84, had six podium finishes with five wins (four in downhill, one in combined). She also had a remarkable career in Pontiac Cup and Canadian Championships.

Despite living in the mountains, Sorensen did not begin to ski until she was 10 years old. She joined the national ski team at 21 and became the first Canadian woman in more than a decade to win a World Cup downhill race. After she retired from skiing, Sorensen married Brendan Lenihan, settling in the United States and having children. “Gerry Sorensen Way” was named in her honour near Kimberley Ski Resort.

Sorensen won the 1982 Bobbie Rosenfeld award as Female Athlete of the Year which her father Chris accepted on her behalf as she was in Europe skiing. She was voted Athlete of the Month, in February 1981 by the Sports Federation of Canada, received the World Champion Award from the Federal Government of Canada at the 1982 Tribute to Champions, Sport Excellence Award in 1984, and was twice named British Columbia’s Best Athlete of the Year (1981, 1982).