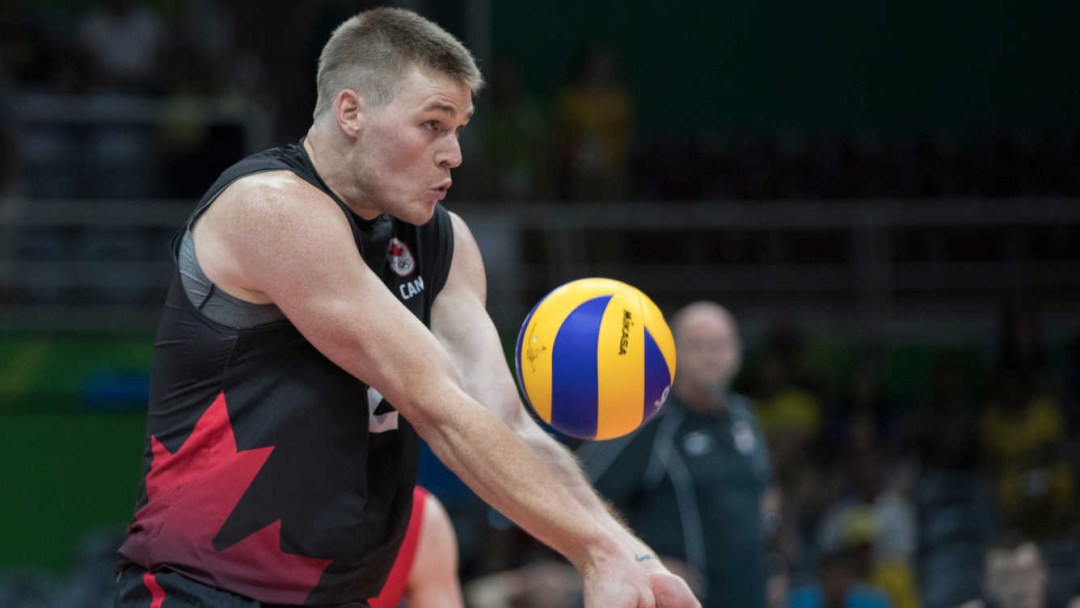 Gord Perrin was a member of the Canadian volleyball team that came within one win of qualifying for London 2012, losing to the United States in the final of NORCECA Olympic Qualification Tournament. In 2014 he was part of Canada’s best-ever seventh place finish at the FIVB World Championships. Perrin was a member of the Canadian teams that won bronze at the 2015 Pan American Games in Toronto and gold at the 2015 NORCECA Continental Championship; he was named the tournament’s Best Outside Hitter at the latter. That came after he tore his left meniscus in March 2015, requiring surgery and taking him out of the rest of his pro season with LRP Piacenza. In 2013 FIVB World League play, Perrin was Canada’s leading scorer in a five-set win over world number two Russia. In 2016 he helped Canada win the FIVB World League Group 2, earning the team a spot in the elite Group 1 for just the second time.

In his Olympic debut at Rio 2016, Perrin helped the Canadian team to a fifth-place finish, defeating eventual silver and bronze medalists, Italy and the United States, in the preliminary round. Since those Games, Perrin has been the captain of the national team. In 2017 he led Canada to bronze in the FIVB World League, their highest ever finish at the event. The Canadian team also won bronze at the NORCECA Continental Championship that year, a feat they would repeat in 2019. When the FIVB Nations League replaced the World League in 2018, Perrin has helped keep Canada in the top-10 of the tournament each year. In 2019 Canada finished ninth the FIVB World Championships, but missed their first chance to qualify for Tokyo 2020. Their next opportunity was the NORCECA Continental Qualifier in January 2020 where they went undefeated, highlighted by a five-set victory over Cuba to secure their second straight Olympic berth. At Tokyo 2020, Perrin and Canada finished eighth after making it to the quarterfinals.

Perrin played three years with the Thompson Rivers University Wolfpack, leading them to a bronze medal at the 2008 CIS Championship, where he was named a tournament all-star. He was awarded the CANWest Rookie of the Year his freshman season, was a two-time All-Canadian, and in 2010 he was TRU’s Male Athlete of the Year. Perrin joined the pro club Arkas Spor in Izmir, Turkey in 2011-12, where he was coached by Canadian national team coach Glenn Hoag, capturing the Turkish league championship in 2013 and 2015. Since then he has played professionally in Italy, Poland, China, Brazil, and currently Russia. Highlights from that timeframe include winning the 2019 CEV Challenge Cup with Belogorie Belgorod in Russia, and both the 2020 Brazilian Cup and the CSV South American Club Championship with Sada Cruzeiro in Brazil. He also finished second at the 2020 FIVB Club World Championships with Sada Cruzeiro.

A Little More About Gord

Getting into the Sport: Started playing club volleyball at 14… Credits high school coach Mike Nelson as the reason he stuck with volleyball… Joined the B.C. provincial team at age 15 when he was a year younger than the other players; wasn’t sure about spending the whole summer in Vancouver and almost declined but ended up having one of the best experiences of his life… Has wanted to be an Olympian since watching Brazil and the United States play for gold at Beijing 2008… Outside Interests: Enjoys playing guitar, learning new skills… Working on a bachelor’s degree from Thompson Rivers University… Would like to pursue a career in coaching… Odds and Ends: Sister Alicia plays for the national women’s volleyball team… Nickname: Gordo… Favourite motto: “Sometimes she goes. Sometimes she doesn’t. That’s the way she goes”-Ray LaFleur…