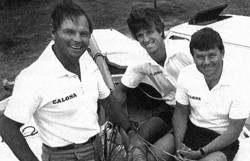 One of the most successful sailors in history, Hans Fogh first made his Olympic debut representing his native Denmark at Rome 1960, winning the silver medal in the first-ever Flying Dutchman class with Ole Gunner Petersen. At Tokyo 1964, Fogh (with Peterson) just missed the podium in fourth with Miss Denmark 1964, and while representing Canada at Montréal 1976, he finished fourth again with Evert Bastet. Competing in the Soling class at Los Angeles 1984, his sixth and final Olympic Games, Fogh won his second Olympic medal, a bronze, 24 years after his first, an Olympic record at the time. He was also 16th at Mexico City 1968 and seventh at Munich 1972 in the Flying Dutchman.

Along with his Olympic success, between 1962-78, Fogh is a four-time World champion, winning a total of seven medals in the Flying Dutchman and Soling classes: for Denmark (three gold, one bronze) and Canada (one gold, one silver, one bronze). At the 1978 Pan American Games he won the silver medal in the Soling class. Fogh was on the crew of the Don Green at the 1978 Canada’s Cup and sailed on Canada II at the 1987 Louis Vuitton Cup.

Fogh started sailing at the age of 17 bypassing the opportunity to take over the family gardening business. His first international title was winning the Flying Dutchman at the 1960 European Championships. Gifted in spatial geometry, Fogh could envision physical objects like a sail, and worked with Danish sailor and maker, four-time Olympic Finn class champion Paul Elvstrom. Midway through his illustrious sailing career, Fogh was encouraged to move to Canada by Olympic sailor Paul Henderson who knew Canada was in need of an experienced sailmaker. Settling in Toronto in 1969, Fogh opened Elvstrom Canada and later he produced sails under his own label (Fogh Sails and North Sails) and opened a retail store (Fogh Marine). He was married to his wife Kristen for 49 years, became a Canadian citizen in 1975, and had two sons.

Fogh’s sailing career spanned seven decades from his first race in the late 1950s to his last race in 2014. He shared Los Angeles 1984 with his oldest son Morten and was able to compete in two Olympic trials with his youngest son Thomas. Born in Rodovre, Denmark, near Copenhagen, Fogh died from Creutzfeldt–Jakob disease in Toronto in 2014.