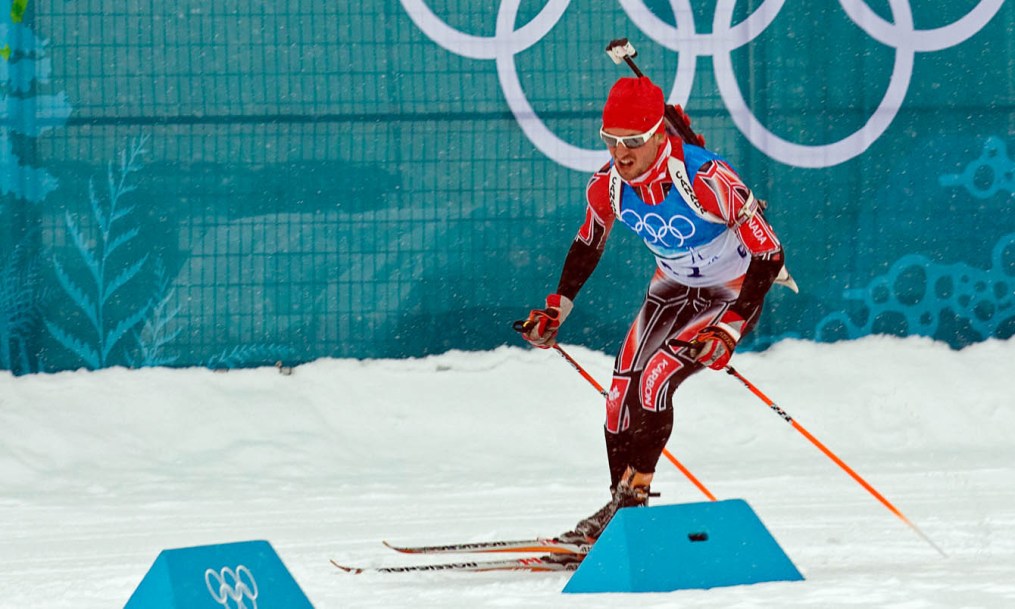 Jean-Philippe Le Guellec made history on December 1, 2012 when he won gold at the season-opening World Cup stop in Oestersund, Sweden. Le Guellec shot clean in the 10km sprint, en route to becoming the first Canadian man to win a World Cup biathlon medal.

It was the breakthrough that had been hoped for since his incredible performance at Vancouver 2010 where he finished sixth in the 10km sprint for the then-top Olympic result ever by a male Canadian biathlete. He also posted best-ever Olympic results by a Canadian male biathlete in the 20km individual (13th) and 12.5km pursuit (11th) as well as being the first Canadian to ever qualify for the 15km mass start race in Olympic competition. At Sochi 2014, the entire Canadian biathlon team produced numerous best-ever results, led by Le Guellec’s fifth place finish in the 10km sprint.

Le Guellec’s trip to the podium was the culmination of a comeback two years in the making after he was struck by mononucleosis in the summer of 2010.  That wrecked his preparation for the 2010-11 season, which was considered a writeoff. After an inconsistent 2011-12 season, he was able to do a full training load in the summer of 2012.

That helped him lead the Canadian men’s biathlon team to its most successful world championships ever in 2013. Le Guellec finished career-best 10th in the 20km individual event while the 4 x 7.5km relay team finished a best-ever eighth.

Family: Father Serge Le Guellec… Mother Lise Le Guellec was his coach during his first three years as a biathlete, so she drove him three hours to the training centre near Quebec City at least twice a month for two years… Younger brother Pierre-Luc… Getting Into Sport: Started in biathlon at age 13… Was a member of the Royal Canadian Air Cadets and didn’t like cross-country skiing but could put up with it if it meant he got to shoot a .22 calibre rifle at targets…After two years as a cadet, he was recruited as a member of a biathlon development group… In 2003 the family moved to Quebec City so he could train at the national centre… Outside Interests: Enjoys drawing, playing guitar, whitewater kayaking, biking, golfing and watching movies… Always travels with his guitar but says he’s not that good… Odds and Ends: Had his Olympic dream sparked after seeing the athletes walk into the Opening Ceremony at Salt Lake City 2002 and Norwegian biathlete Ole Einar Bjorndalen win five gold medals at those Games…Favourite Olympic memory is attending the gold medal hockey game at Vancouver 201o and seeing Sidney Crosby score the winning goal in overtime… Admires Bruce Lee and Georges St-Pierre for their philosophies on sport and Metallica lead vocalist James Hetfield for staying true to himself and grounded… Pre-race music includes the album Master of Puppets by Metallica… Likes to collect beer mugs, coasters and shot glasses during his travels… Favourite mottos: Impossible is Nothing and Be Like Water…

As the most experienced member of the Canadian women’s biathlon team, Zina Kocher competed in her third straight Olympic Winter...