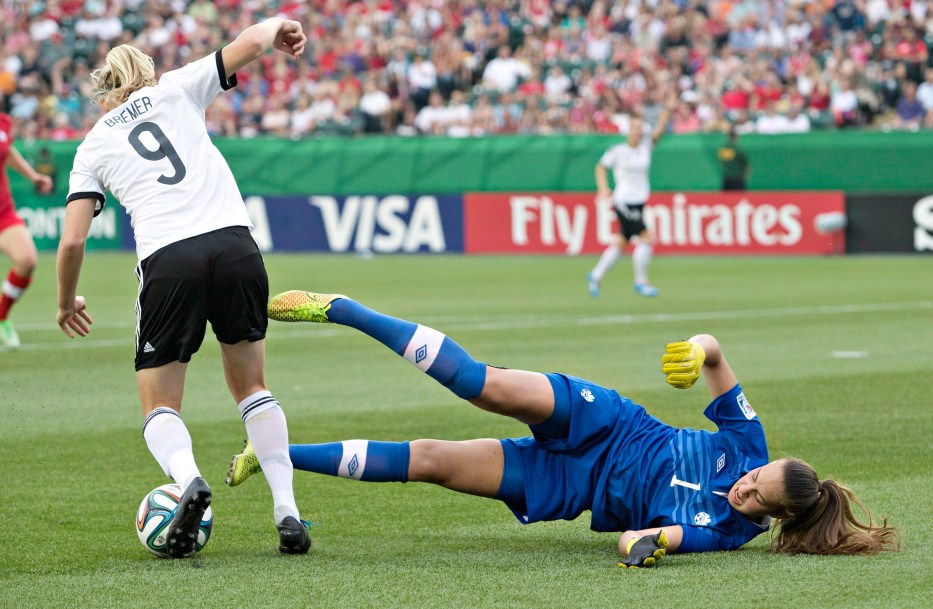 Kailen Sheridan made her Olympic debut at Tokyo 2020 where she helped Canada win the gold medal. She went to the Games as the backup goalkeeper, but joined in the action in the 58th minute of Canada’s opening match after starter Stephanie Labbé sustained an injury. That led to Sheridan playing full time in Canada’s 2-1 victory over Chile in their second match.

Sheridan was 15 years old when she made her debut in the Canadian youth program in 2010. She won a silver medal at the 2012 CONCACAF U-17 Championship, earning three clean sheets and conceding just two goals en route to qualifying the team for the 2012 FIFA U-17 World Cup. She picked up another shutout at that World Cup, helping Canada reach the quarterfinals. Sheridan also played all four games at the 2014 FIFA U-20 World Cup in Canada, again reaching the quarterfinals.

She was named to Team Canada for the Toronto 2015 Pan Am Games. After starter Labbé picked up a red card in the previous match, Sheridan was pressed into action for Canada’s second group stage match, dropping a 2-0 decision to Costa Rica.

Sheridan joined the senior national team at the 2016 Algarve Cup and was selected as an alternate for Rio 2016. She started her first senior international game at the 2017 Algarve Cup, picking up a 2-1 win over Russia and helping Canada finish second.

Following an injury to starter Erin McLeod, Sheridan was added to the 2018 CONCACAF Championship roster. She earned a clean sheet in Canada’s 12-0 win over Cuba. They would go on to win silver and qualify for the 2019 FIFA Women’s World Cup. She also represented Canada at both the 2018 and 2019 Algarve Cups, getting one start in each tournament, finishing third in the latter.

Sheridan served as the backup at the France 2019 World Cup. Her next start with Canada came at the 2020 CONCACAF Olympic Qualifying tournament. She helped Canada to a silver medal, securing their spot at Tokyo 2020. She came on as a substitute in one game at the 2021 SheBelieves Cup as Canada finished third.

In her freshman year at Clemson, Sheridan was named to Soccer America’s All-Freshman Second Team, All-ACC Third Team, and ACC All-Freshman Team. She was a co-recipient of Clemson’s Defensive Player of the Year and was a major reason for team’s goals-against dropping from 1.98 per game in 2012 to 0.90 in 2013. Sheridan was even better in her sophomore year, playing in 18 games with a record of 12-3-3 and a 0.56 GAA, while being named to the All-ACC First Team and Academic Team. Her third year she was again an All-ACC First Team selection and was an All-American Third Team.

A Little More About Kailen

Getting into the Sport: Started playing soccer at age 5… Was a shy child so her parents signed her up to be more social; loved it as soon as she stepped on the field… Outside Interests: Majored in Psychology at Clemson University… Enjoys writing, watching movies… Volunteers with the MCSPCA Monmouth County Animal Shelter, serving as a foster parent for dogs…  Odds and Ends: Favourite motto: “When you’re not working, someone out there is training to be better than you”… Game day routine includes listening to music, dancing around with the team, writing a message to herself on her arm, watching a video that is saved on her phone… Always travels with her teddy bear… Collects coins from her travels… Nickname: Kay Kay..