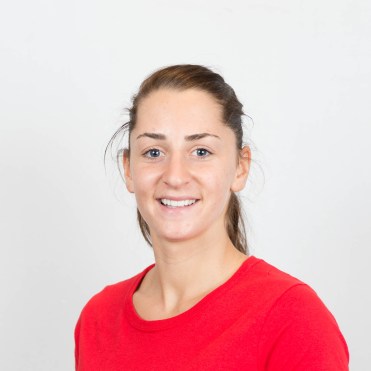 Kamille Desjardins has been a dominant force at the national championships, beginning in 2006 when she captured a junior team gold medal at age 14. She has followed that up with victories in either the individual or team event at each national championship in which she’s competed since, except 2008. She won her first senior national individual title in 2011.  As a junior competitor, Desjardins finished fifth at the 2009 World Junior Championships in the 16-17 age group. She has had great success at the Pan American Championships, most recently as a senior competitor, winning silver in 2013, gold in 2014 and bronze in 2015. Other highlights included back-to-back gold medals at the US Open in 2014 and 2015.

Family: Parents Paul Desjardins and Sonia Labelle… Older sister Guy-Ane Desjardins… Getting into the Sport: Started karate at age 7… Her parents wanted her to try it and she fell in love it… Outside Interests:

Completing courses in mental health and biology by distance though Université du Québec… Is considering attending the Quebec National Police Academy or going to the RCMP…  Enjoys working out and everything around health such as nutrition, cooking and new ways of training… Relaxes by watching movies, going to the beach and doing water sports such as swimming, wakeboarding and boating… Works as a karate coach, substitute teacher and a park supervisor with the City of Gatineau in the summer… Odds and Ends: Favourite mottos: “It always seems impossible until it is done” and “Create the impossible to be unstoppable”… Before a match listens to inspirational music such as an Olympic song or the national anthem sung by Celine Dion… Has a metal shell for luck with the phrase “enjoy the moment” written inside… Always travels with powdered Gatorade… Nickname: Kam…