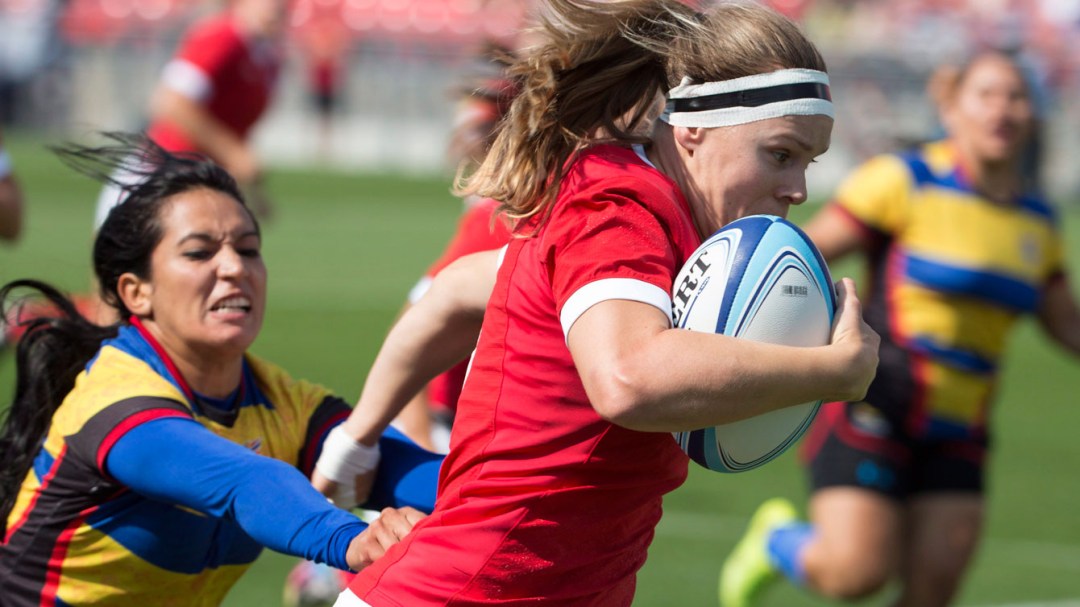 After playing with the Canadian Maple Leafs development team, Paquin received her first cap with Canada’s Women’s Sevens Team in 2012 during the NACRA Festival in Ottawa, Ontario. In 2013, Paquin won a silver medal at the Women’s Rugby World Cup Sevens and followed that up with a second-place finish with Canada’s Women’s Fifteens Team at the 2014 Women’s Rugby World Cup.

Paquin finished the 2015-16 Sevens Series with 14 tries, the second-most by a Canadian player and tied for the ninth in the world. With 15 points on three tries, Paquin was one of Canada’s top scorers as the team won bronze in the Olympic debut of rugby sevens at Rio 2016. In her second Olympic appearance, Paquin recorded 15 points on three tries, ranking her as Canada’s number three scorer.

Paquin was with the 15s team at the 2017 Rugby World Cup when she suffered a meniscus injury in her right knee that required two surgeries and a lengthy rehab. It took her about a year and a half to get back on the field and was the most challenging thing she had ever faced, but the experience has made her more appreciative every time she gets to wear the Canadian jersey

Paquin rejoined the sevens team at the Kitakyushu stop of the Sevens Series in April 2019 and couldn’t have asked for a better return as she helped Canada win the tournament. Through the 2019-20 season, Paquin has played in 147 Sevens Series matches scoring 67 tries and 335 points.

A Little More About Karen

Getting into the sport: Started playing rugby at the age of 14… Her volleyball coach told her she should try out for the school team because she would love it… Was immediately intrigued by the aggressiveness of the sport where her intense personality would be a strength… Outside Interests: Earned a Chemical Engineering degree from the Laval University in 2012… Was a chemical engineer with Cascades before becoming centralized with the national team… Ambassador for KidSport… Enjoys a good puzzle (which is like meditation) and gardening (combining her love of plants and food)… Her other favourite sport is ice canoeing… Odds and Ends: Nickname is “Pako”… As a child who wanted to be a skier her idol was Jean-Luc Brassard… Also looked up to Chantal Petiticlerc for her dominance and contagious smile when she crossed the finish line… Favourite motto: We play better when we smile… Collects coffee mugs that are handmade in the countries she visits…