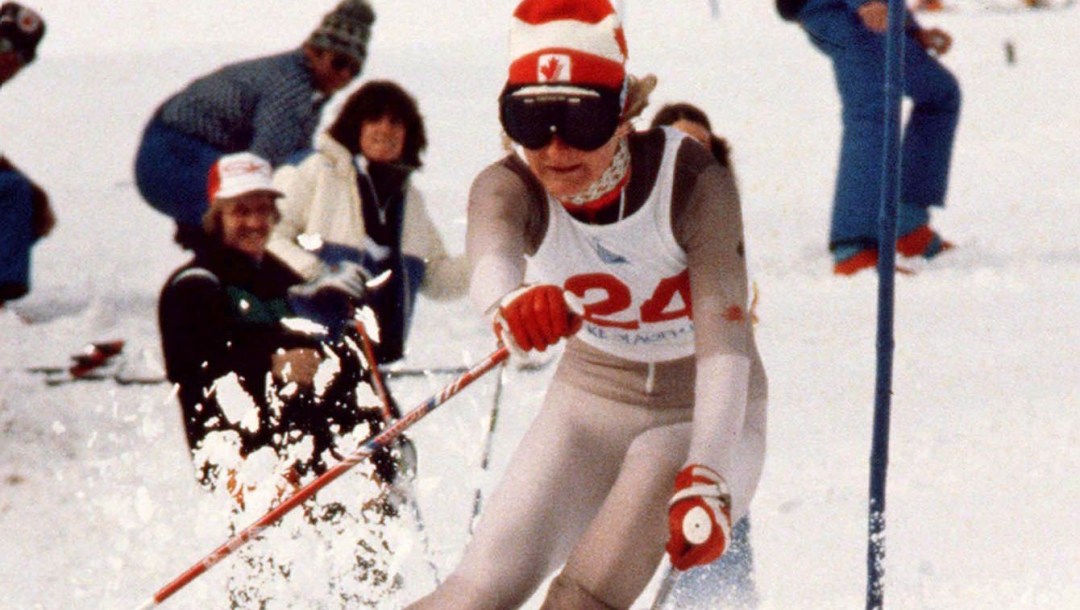 Kathy Kreiner made her first of three Olympic appearances at Sapporo 1972 with modest results in the slalom and downhill. Her second Olympics at Innsbruck 1976 weren’t going terribly well either having finished 19th in the downhill and not finishing the slalom. But on Friday the 13th, a confident 18-year-old Kreiner just knew she was going to win despite being such a long shot. She was the first skier out of the start hut posting the time to beat, which no one did – including the prohibitive favourite, German Rosi Mittermaier, who finished 0.12 seconds behind and was attempting to become the first woman to sweep all three Olympic alpine skiing titles in one Games, having won the first two. Kreiner won the same Olympic gold medal Nancy Greene had eight years earlier at Grenoble 1968. She had become the youngest-ever alpine skiing Olympic champion and produced the only gold medal by a Canadian at Innsbruck 1976. Kreiner did not defend her Olympic title at Lake Placid 1980, but had impressive finishes of fifth in the downhill, ninth in the giant slalom and 15th in the slalom.

The youngest of six children, Kreiner who was coached by her father, was a natural on the slopes. She was on skis by three and racing by seven. She was inspired by stories of Grenoble 1968 told by her father who was the Canadian team doctor and saw Nancy Greene win her giant slalom gold. At 12, Kreiner was the youngest ever to win the Mt. Tremblant Taschereau downhill race and at 14 she was invited to join the national team. Kreiner’s first World Cup podium finish was in 1973 and the following year she had her first and only World Cup victory at age 16 at Pfronten, Germany, winning by one second. After a decade on the World Cup circuit, Kreiner finished with one victory, seven podium finishes (one downhill, six giant slalom) and 45 top-10 finishes. By virtue of her 1976 Olympic title, Kreiner was also the concurrent world champion. She won five gold and six silver medals at the national championships.

Kreiner left the national team in 1980 and competed for a year as an independent skier. Following her retirement from racing in 1981, she earned a Master’s degree in sports psychology from the University of Ottawa. Staying close to sport, Kreiner pursued a career as an elite athlete mental trainer specializing in neuro feedback. Settling in Vancouver, British Columbia, she married former freestyle skier Dave Phillips and together they had three children. She became a competitive slalom water skier, continued to ski recreationally, hike and volunteer in her community. At Calgary 1988, Kreiner was a bearer of the Olympic flag in the Opening Ceremony. Her sister Laurie was a two-time Olympian (1972, 1976) in alpine skiing with her best finish just off the podium in fourth in giant slalom at Sapporo 1972.