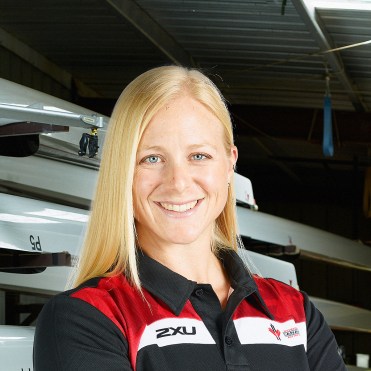 When Kerry Maher-Shaffer began rowing, in her mind there was no other end game than to compete and stand on the podium at the Olympic Games one day. She first represented Canada at the 2005 World U23 Championships where she just missed the podium in the four. She debuted at the senior world championships in 2011 in the double sculls, returning to the event in 2014 when she finished fifth with the four. Maher-Shaffer raced collegiately for the University of Virginia and was named to the 2006 All-ACC team. In 2005 she was the ACC Champion with the varsity eight crew and finished fourth at the national championship. The year prior, she won the ACC Championship with the varsity eight and the national title with the coxed four.

Family: Older brother Ben Maher is in the Canadian Forces… Younger sister Meghan Elgersma… Husband Matt Shaffer is a helicopter pilot with the US Coast Guard… Getting into the Sport: Started rowing at age 15… Had seen it during Sydney 2000 and liked that it didn’t involve a ball because she wasn’t coordinated enough for those sports… Her first in-boat experience was in a coxed four; says she went from the dock straight into the shore… Outside Interests: Graduated from the University of Virginia in 2007 with a Bachelor of Arts in Music… Enjoys music and promoting health and wellness in young families… Faith is a big part of her life, as is the military… Odds and Ends: Favourite quote: “For I know the plans I have for you, declares the Lord, plans to prosper you and not to harm you, plans to give you hope and a future” – Jeremiah 29:11… Two of her role models are runners Ryan Hall and Meb Keflezighi who share her Christian faith…