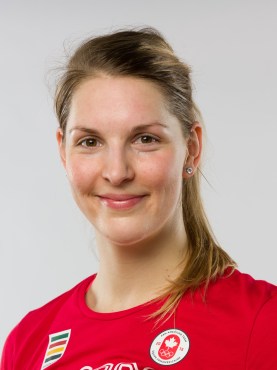 Kim Barette St-Martin has dreamed of competing at the Olympic Games since childhood, when her father told her stories of his experiences at the 1976 Games in Montreal. She was part of the Canadian team at the 2007 Pan American Championships and then at the 2007 Pan American Games in Rio, helping the squad finish sixth at both events. She returned to the Pan Am Championships in 2013 where Canada finished ninth after defeating Costa Rica in the final classification match. Barette St-Martin has won eight Canadian championships across the youth, junior and senior levels with her club team in Quebec.

Family: Father Pierre St-Martin competed at Montreal 1976, the only time Canada has participated in the Olympic handball tournaments, and has been her biggest inspiration… Mother Janie Barette… Getting into the Sport: Started playing handball at age 12… Likes that it is an intense team sport, complete with running, jumping, throwing and physical contact… Outside Interests: Graduated from Université du Québec à Montréal in 2010 with degree in kinesiology… Works as a Cégep physical education teacher… Enjoys watching movies, hosting friends, working out, swimming, reading, and playing tennis… Odds and Ends: Favourite motto: “Live each day like it is your last, embrace each moment like it is your first”… Collects souvenir shirts from her travels… Nickname: Kim les joues…