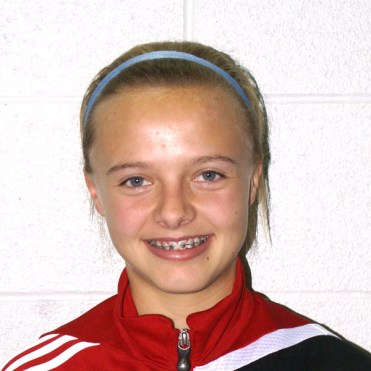 Kinley McNicoll started her international career in good fashion by scoring the gold medal-winning goal against Mexico in the 2010 CONCACAF U-17 Championship. She was named captain of Canada’s 2014 FIFA U-20 World Cup team that made the quarterfinals. McNicoll plays collegiately for the Wisconsin Badgers. In three seasons she has 18 goals and 28 assists in 64 games. She sits just three assists shy of the school record. In her time at Wisconsin she has been named to the All-Big 10 Freshman Team, Second Team, and First Team. She also plays for the Seattle Sounders in the W League (women’s pro-am league in the United States).

Getting into the Sport: Says that as soon as she could walk she had a ball at her feet… Grew up participating in cross country running, volleyball, track, basketball… Outside Interests: Is a junior at the University of Wisconsin, majoring in Human Development… Enjoys running, lifting, cooking, hanging out with friends, shopping, reading… Odds and Ends: Favourite quote: “To give anything less than your best, is to sacrifice the gift” – Steve Prefontaine… Prefontaine is her role model because of his incredible work ethic and desire to win… Always travels with her badger pillow pet and laptop…