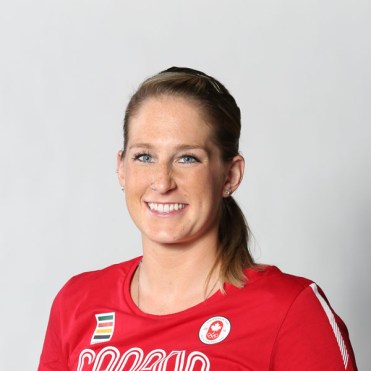 Kyla Richey has been a member of the senior national team since 2009. She had made the junior national team while in grade 10 and then in grade 12 had trained with the senior national team for the first time. Her international career includes two appearances at the FIVB World Championships and two appearances at the Summer Universiade, highlighted by a sixth place finish in 2013 which was Canada’s best result since 1997. Playing collegiately at the University of British Columbia, she helped the Thunderbirds win five straight CIS titles (2008-12) and was named CIS Championship MVP in 2009 as well as CIS Player of the Year in 2012. Richey has played professionally in Italy, Germany, and Turkey.

Family: Parents George and Jan Richey… Younger brothers Stuart and Connor… Her father was a wrestler who competed at the 1974 World Championships and was a CIS champion… Her mother played volleyball at UBC… Getting into the Sport: Started playing volleyball at age 10… Comes from a super active family and was always involved in team sports because she loved working hard to achieve a common goal… Had early success in track and field which sparked her Olympic dream… Her mother used to take her to Vancouver to watch UBC volleyball games which featured national team players…  Outside Interests: Graduated from the University of British Columbia in 2012 with a degree in Kinesiology… Enjoys exploring, traveling to other cities, reading, writing, cooking, music, spending time outdoors, hiking, swimming, attending concerts… Odds and Ends: Favourite motto: “Hard work beats talent when talent stops working hard”… Looks up to Christine Sinclair because she worked so hard to put her team on the international map and has done so with character and class… Wears her lucky green bracelet… Collects magnets and postcards from her travels… Nicknames: Kyky, Beans, Richey…