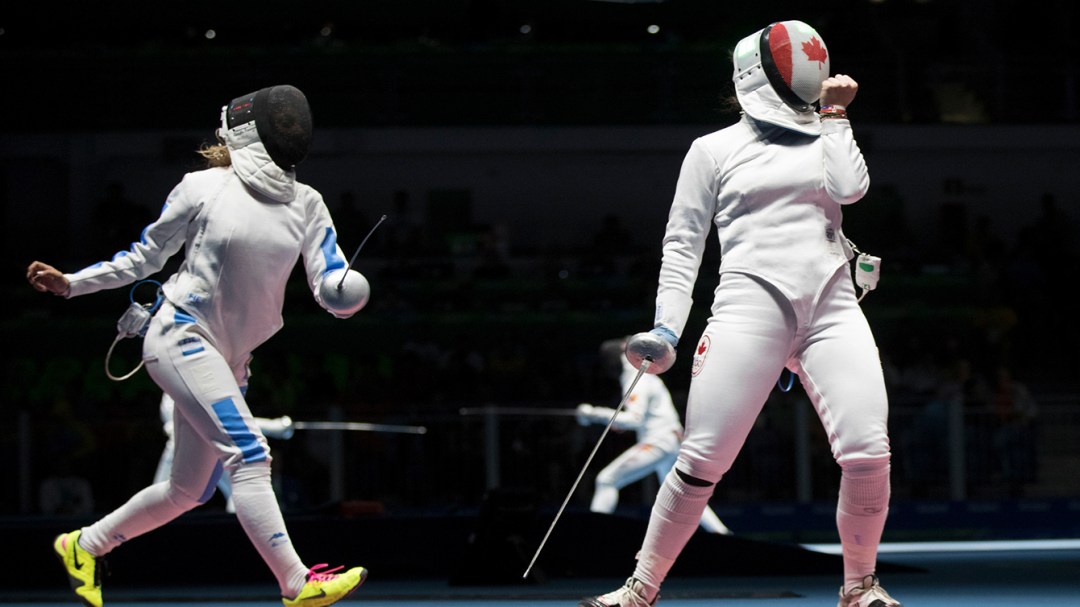 Leonora Mackinnon is a Canadian who was born and raised in England. After representing Great Britain early in her career, including at the 2010 European Junior Championships, by 2014 she was wearing the red and white for Canada and won individual épée gold at the Pan American Junior Championships. She ended that season with a career-high junior world ranking of 21st, despite having to miss the world junior championships after rupturing the anterior talofibular ligament in her ankle and undergoing surgery. A year later she won individual épée bronze as a senior at the Pan American Championships, competed at the 2015 Pan Am Games in Toronto and made her senior world championship debut. Mackinnon made her Olympic debut at Rio 2016, scoring an upset victory in the first round. Mackinnon helped Canada reach the finals of the team épée event at the Pan American Championships in 2016, 2017 and 2018, winning gold in 2016. She won the individual épée event at the 2018 Commonwealth Championships and helped Canada to team silver at the quadrennial competition. Growing up in the United Kingdom, Mackinnon competed in the UK School Games where she won gold twice. She also won the Master at Arms Trophy five years in a row at the UK Public Schools Championships.

A LITTLE MORE ABOUT LEONORA

Getting into the Sport: Started fencing at age 8… Both older sisters were already competing and she wanted to as well… Outside Interests: Graduated from St. Mary’s University in England in 2017 with a Bachelor of Arts in Physical and Sport Education… Enjoys skiing, cycling, swimming, listening to music, watching movies with friends… Odds and Ends: Favourite motto: “It doesn’t matter how many times you get knocked down but how many times you get back up”… Role model is Roger Federer because of his dedication to his sport and commitment to training which has enabled him to stay at the top of his game for so long… Collects postcards and shot glasses from her travels… Nickname: Leo… Great-grandfather Minotti Bohn was a well-known Norwegian footballer…