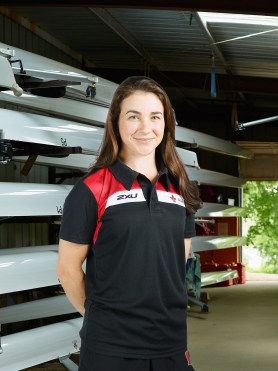 Liz Fenje represented Canada at three straight world u23 championships from 2010 to 2012 in the lightweight doubles sculls. In 2012 she also competed at the senior world championships for the non-Olympic boat classes in the lightweight quad sculls. Fenje has enjoyed great success in her university career. As a senior at Stanford she stroked the lightweight eight to their fourth consecutive Intercollegiate Rowing Championship title. In 2014 she was in the bow seat of the Oxford Blue Boat when they were victorious in the famed Oxford-Cambridge Boat Race.

Family: Parents Nick and Ann Fenje… Younger brother Chris… Getting into the Sport: Started rowing at age 13… Was a competitive runner and swimmer before started rowing in high school when she was looking for a new sport… Her first time in an eight it felt like they were flying… Outside Interests: Earned her Bachelor of Arts at Stanford University and a Master of Studies at Oxford University… Enjoys reading and trying new recipes… Odds and Ends: Favourite motto: “I don’t know what the future holds, but I know who holds the future”…

Kate Haber (nee Sauks) began rowing while pursuing her PhD at the University of Toronto. As an undergrad student she…