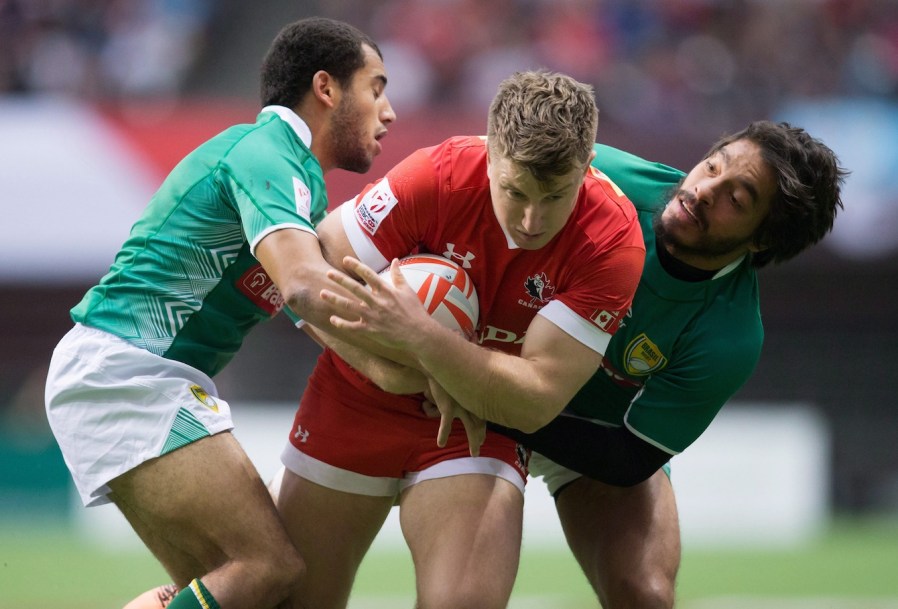 Lucas Hammond made his senior rugby sevens debut with Canada at the Port Elizabeth stop of the 2012 Sevens Series, scoring his first try. The following year he was named to the World Cup Sevens roster, helping Canada become Plate Champions, finishing in ninth place overall. He was also on the 2018 World Cup team that finished 12th.

Back on the Sevens Series tour, Hammond appeared at a pair of stops in 2014, helping Canada to a best-ever sixth place finish in the season standings. He had his breakthrough year in 2015, becoming a regular starter. In 2017 he scored twice at the Singapore Sevens, helping Canada to their first ever tournament win. He has over 150 career caps for Canada on the Sevens Series and more than 25 tries.

Hammond represented Canada at the 2014 and 2018 Commonwealth Games, finishing ninth both times. In between he also competed at the Toronto 2015 Pan American Games, winning gold. He played all six games at the final qualification tournament for Rio 2016, where Canada came up just short of making it to rugby sevens’ Olympic debut. He would compete in his first Olympic Games at Tokyo 2020, suiting up for five games as Canada advanced to the quarterfinals.

With the junior Canadian program, Hammond competed at the U17 Wellington Rugby Festival and for the U18 national squad at the 2011 Youth Commonwealth Games in the Isle of Man. He also represented Canada at a pair of U20 Junior World Rugby Trophies in 2012 and 2013, coming away with a silver at the latter. Hammond was named the 2013 Rugby Canada Young Player of the Year.

A Little More About Lucas

Getting into the sport: Started playing in South Africa at age seven. His parents are both Canadians who decided to move back from South Africa to be closer to family… Outside Interests: Enjoys going to the beach, surfing, hiking, kayaking… Works in real estate… Odds and Ends: Nickname: Hammer… Stays relaxed ahead of games by listening to music, particularly Taylor Swift… His parents are both Salvation Army pastors so he grew up volunteering at the food bank and providing community meals… Collects magnets from everywhere he travels for his mother…

Justin Douglas made his World Rugby Sevens Series debut on the Gold Coast of Australia in October 2012, at just...