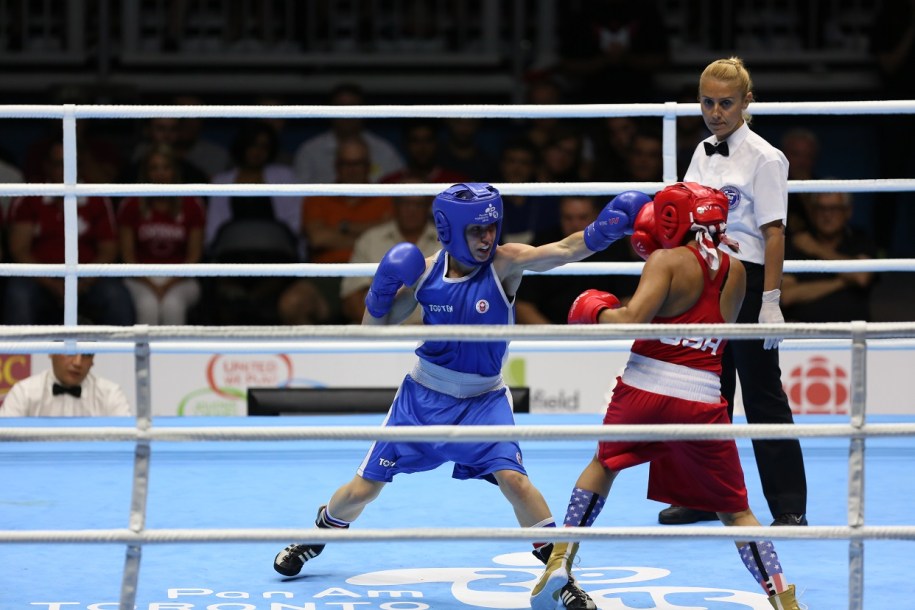 Mandy Bujold’s Olympic dream began after she won her junior national title in 2006. That result gave her the drive to be the best and make the national team. One year later, she was the senior national champion in the 50kg weight class and also won gold at the American Women’s Continental Championships, her first of three victories at the event.

Bujold made her debut at the AIBA Women’s World Championships in 2008. She competed at each edition of the global competition through 2016, recording her best result in 2014 when she finished in the top eight after a quarterfinal loss to eventual silver medallist Lisa Whiteside of England.

Bujold achieved a career highlight when she won gold at the 2011 Pan American Games, the first time women’s boxing was included at that multi-sport competition. Bujold earned another multi-sport medal in 2014 when she captured bronze at the Commonwealth Games in Glasgow. An 11-time national champion, Bujold successfully defended her Pan Am Games title at Toronto 2015, defeating American world number one and 2014 world champion Marlen Esparza in the final to become the first female boxer to win two gold medals at the Pan Ams.

Bujold went on to earn her first Olympic berth with a gold medal at the American Continental Qualifier in March 2016. In her Olympic debut at Rio 2016, Bujold advanced to the quarterfinals where she suffered a defeat after spending the night in hospital with an illness. She had lost five pounds in fluids overnight while hooked up to an intravenous feed.

After winning silver at the 2017 Continental Championships, Bujold’s next big victory was welcoming daughter Kate Olympia into the world in November 2018. She returned to competition in 2019, winning silver at the International Balkan Tournament and taking top spot in the 51kg weight class at the Canadian Olympic Qualifier. She would go on to win bronze at the Bocskai Memorial Tournament in February 2020 before all competitions were shut down because of the COVID-19 pandemic.

Bujold was prepared to compete at the Americas Olympic Qualifier for Tokyo 2020, but when that was cancelled for a second time, it looked like she would not be able to compete in her second Olympic Games. She was not included on the world ranking list that would now be used to allocate Olympic quota spots because she had been on maternity leave while the events that would count had been held. Bujold appealed to the Court of Arbitration for Sport, which ruled that any decisions made about Olympic boxing qualification needed to include accommodation for women who were pregnant or postpartum during the qualification period. In her second Olympic Games, Bujold was eliminated in the Round of 32.

A Little More About Mandy

Getting into the Sport: Started boxing at age 16… While growing up the family had a heavy bag in their basement and two sets of gloves that she can remember using since she was 10… But after her brother started boxing it brought back her interest in the sport… Outside Interests: Attended the University of Waterloo… Enjoys the outdoors, traveling, reading, cooking… Founded the Champions for Charity boxing event… Odds and Ends: Favourite motto: “If you can see it you can create it, if you can feel it you can perform it, if you can image it you can achieve it”…