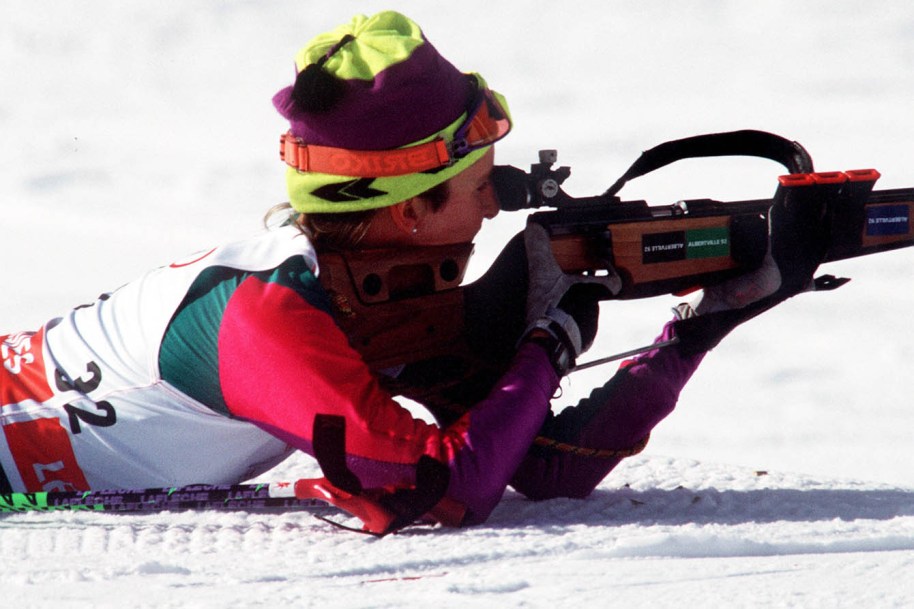 Three-time Olympic medalist Myriam Bédard made her Olympic debut at Albertville 1992 when the sport made its Olympic debut for women, winning a bronze medal in the 15km individual event. She was the first Canadian (or North American) biathlete ever to win an Olympic medal. In Lillehammer 1994, Bédard won her first gold medal in the 15km individual. Five days later, in the 7.5km individual race, where she was the defending world champion, Bédard won her second gold medal of the Games by 1.1 seconds, using mismatched skies that were waxed differently. By the time Bédard competed in Nagano 1998, she was a mother and had suffered numerous injuries, and her best finish was 17th in the 4×7.5km relay.

In a sport dominated by Europeans, Bédard was one of the best biathletes that North America ever produced. A member of Canada’s national biathlon team from 1987-1998, Bédard captured two junior national and three senior national titles. Her first major international title was a 1991 World Cup event and first world title was at the 1993 World Championships in Bulgaria, winning gold in the 7.5km sprint (silver in the 15km).

Bédard competed as a figure skater until the age of 12. Already proficient on skis, at the age of 15 Bédard joined the Royal Canadian Army Cadets learning the shooting skills required not only for combat but for the Olympic biathlon. By 18, she had won her first junior national title.

Retiring from biathlon, Bédard briefly attempted a competitive career in speed skating. In 2004 she was the only woman on the International Biathlon Union’s executive board.

Bédard was inducted into Canada’s Sports Hall of Fame in 1998 (first biathlete to become an honoured member) and the Canadian Olympic Hall of Fame in 2004. She was awarded the Lou Marsh Trophy and Velma Springstead Trophy in 1994. In 2001, Bédard was a recipient of the Olympic Order in Silver presented by the International Olympic Committee.

Marc-André Bédard made his Olympic debut at Vancouver 2010 where he was a member of the 4x7.5km relay team that…