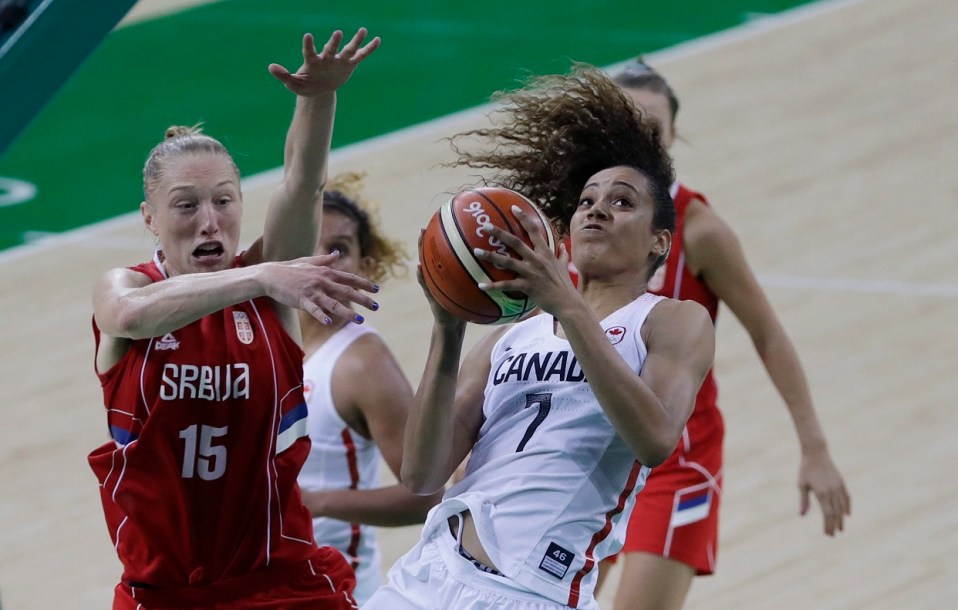 Nayo Raincock-Ekunwe has wanted to play for Team Canada since she joined the performance centre roster at age 16 and was handed her first jersey with the Canada Basketball logo. As a member of the national development team she competed at the 2011 Universiade, averaging 16.1 minutes per game. As a university freshman, Raincock-Ekunwe helped Simon Fraser win the CIS national title in 2009-10, the last year before the school joined the NCAA. Her collegiate career was so impressive that her jersey from the 2012-13 season, when she led SFU to the NCAA Division II Sweet 16, was hung in the Women’s Basketball Hall of Fame in Knoxville, Tennessee.

She gained her first experience with the senior national team in exhibition games leading up to the 2013 FIBA Americas tournament. In 2015 she represented Canada at the Pan American Games in Toronto, as well as at the FIBA Americas Championship, winning a pair of gold medals, the latter qualifying the team for Rio 2016. In her Olympic debut, Raincock-Ekunwe was Canada’s top rebounder against Team USA and averaged 7.7 points and 22.5 minutes per game.

She next suited up for Canada in 2018. At the FIBA World Cup, she averaged eight points and 25.8 minutes per game as Canada finished seventh. In 2019, Raincock-Ekunwe helped Canada to the silver medal at the FIBA AmeriCup and then started all three game of the FIBA Olympic Prequalifying Tournament where she was named the Bryan Anderson MVP on the strength of her 14.7 points and 6.3 rebounds per game. Raincock-Ekunwe helped Canada to a 3-0 record at the FIBA Olympic Qualifying Tournament in February 2020 to book the team’s ticket to Tokyo 2020. She averaged 18.4 minutes of playing time per game in Tokyo.

Raincock-Ekunwe played professionally in Switzerland in 2013-14 before moving to Germany (2014-16) and then onto Australia in 2016. In 2017 and 2019 she played for the New York Liberty of the WNBA, spending time in France (with Nantes and Bourges) in between.

A Little More About Nayo

Getting into the Sport: Started playing basketball at age 8… Loved the Toronto Raptors and wanted to be a basketball player when she grew up… Outside Interests: Enjoys reading, practicing languages, exploring new cities… Majored in Health Sciences at Simon Fraser University… Odds and Ends: Nickname: Nay… Game day routine includes eating a big breakfast and watching a movie…