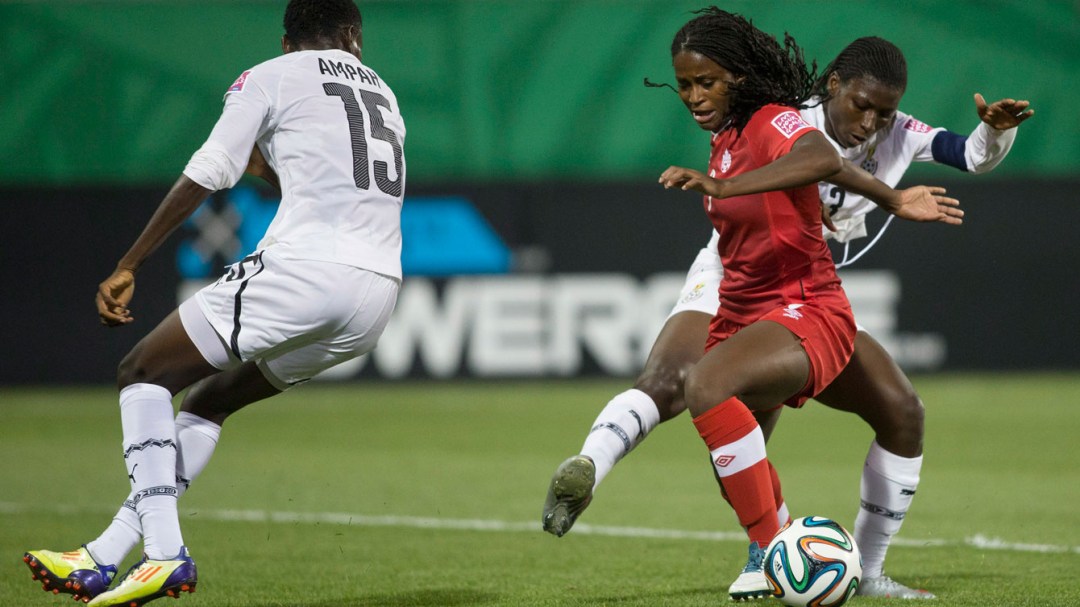 Nichelle Prince was part of Canada’s gold medal-winning team at Tokyo 2020. She assisted on the game-winning goal against Chile in the preliminary round and started in five of Canada’s six games, including the quarterfinal, semifinal, and final.

Prince knew she wanted to play for Team Canada at age nine when her parents took the family to Boston to watch the FIFA Women’s World Cup. Her day to be just like the players she saw came in 2012 when she helped Canada win silver at the CONCACAF U-17 Championship and qualify for the FIFA U-17 World Cup. She was then a member of the 2014 FIFA U-20 World Cup team that made the quarterfinals, earning Player of the Match honours against Finland.

Prince was named to the roster for the 2015 Pan Am Games in Toronto but was unable to play due to injury. She scored a hat trick in Canada’s 10-0 win over Guatemala at the CONCACAF Olympic Qualifier where the team finished second to earn a spot in Rio. Prince was also a member of the victorious Canadian squad at the 2016 Algarve Cup.

In her Olympic debut at Rio 2016, Prince came on as a sub in three matches, helping Canada take home a bronze medal. The following year she helped Canada finish second at the Algarve Cup and also took home a bronze at the same event in 2019.

Prince had her breakout year with the senior team in 2018, scoring her first goal during Canada’s 1-0 win over Brazil in the lead up to the CONCACAF Championship. She followed that up by scoring both goals in Canada’s 2-0 group stage win over Jamaica and netted the game winner in their 3-1 win over Costa Rica. The Canadian team went on to win silver and qualify for the 2019 FIFA Women’s World Cup.

Without realizing the severity of a preexisting injury, Prince played through a torn meniscus at the 2019 World Cup. She still managed to score once in Canada’s win over New Zealand. After the tournament she required surgery and rehab that kept her sidelined for five months. She returned in 2020 to help Canada win silver at CONCACAF Olympic Qualifying Tournament, securing their spot for Tokyo 2020. In 2021, Prince played all three games for Canada at the SheBelieves Cup, helping them to a third place finish.

Over her four years with The Ohio State Buckeyes, Prince was named to the All-Big 10 Second Team and All-Freshman Team in 2013 and was an Academic All-Big 10 in 2014 and 2015. She twice led the team in scoring and finished her Buckeyes career with 27 goals. In 2017, Prince turned pro and was selected 28th overall by the Houston Dash of the NWSL. In 2020 she won the NWSL Challenge Cup.

A Little More About Nichelle

Getting into the Sport: Started playing soccer at age 4… Her sister had started playing and loved it so her parents signed her up too; she cried the whole way to her first game because she didn’t want to play, but quickly fell in love with it too… Has known since she was a kid that she was going to compete in the Olympics, just wasn’t sure if it would be in soccer or track… Outside Interests: Graduated from The Ohio State University in 2017 with a degree in sport management… Enjoys coaching and travelling… Odds and Ends: Favourite motto: “Life begins at the end of your comfort zone.”… Inspired by Christine Sinclair because she has changed what it means to be a female athlete in Canada… Eats oatmeal the morning of every game because her dad made it before every track meet and soccer game when she was younger… Nickname: Vic…