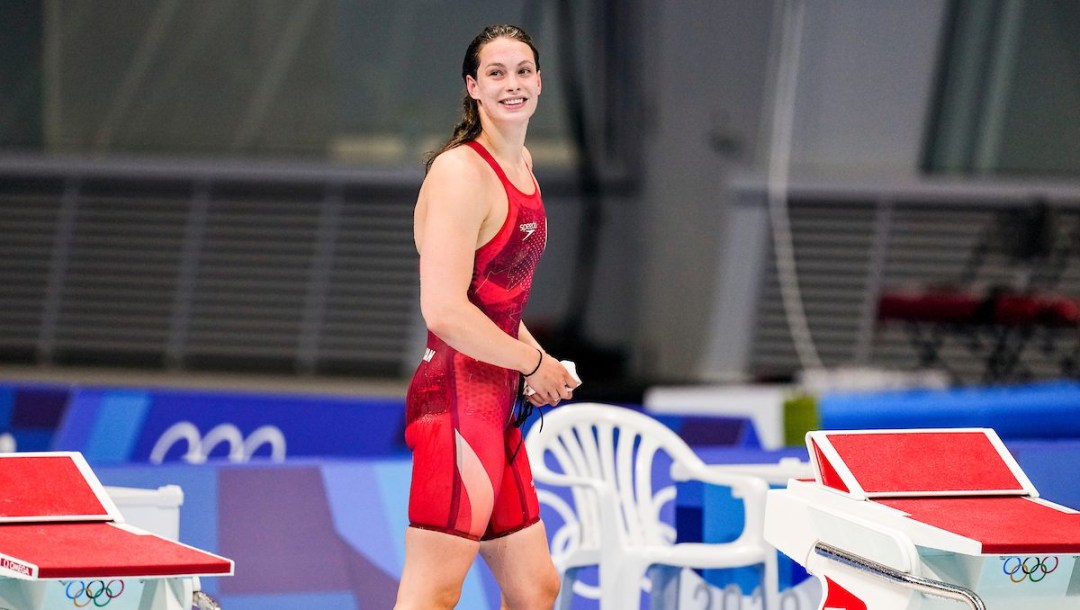 Oleksiak had a record-setting Olympic debut at Rio 2016 on several fronts. The 16-year-old became the first Canadian athlete to win four medals at a single summer Games. Those four medals also tied her with Victor Davis as Canada’s most decorated Olympic swimmer of all-time. She set an Olympic record in tying for gold in the 100m freestyle, making her Canada’s first Olympic champion in swimming since Barcelona 1992 and the first woman to earn that title since Los Angeles 1984. She was also Canada’s youngest Olympic gold medallist ever.

Anchoring the 4x100m freestyle relay to bronze, Oleksiak and teammate Taylor Ruck became the first ever Olympic medallists born in the 2000s. They added another bronze in the 4x200m freestyle relay and Oleksiak also won silver in the 100m butterfly. Those achievements in Rio led to Oleksiak being selected as Team Canada’s Closing Ceremony flag bearer. She also won Canada’s Athlete of the Year and the Bobbie Rosenfeld Award as the CP Female Athlete of the Year.

Oleksiak won three more medals at Tokyo 2020, starting with a silver in the 4x100m freestyle relay for which she was the anchor swimmer. That was followed by a bronze in the 200m freestyle. She also won bronze while swimming the freestyle anchor leg of the 4x100m medley relay. Oleksiak came within 0.07 of a second of another medal when she finished fourth in the 100m freestyle while setting a Canadian record time of 52.59 seconds. She was also fourth with the 4x200m freestyle relay team.

With nine career medals, Oleksiak is Canada’s most decorated swimmer all time at the FINA World Championships.

Oleksiak competed at her first FINA Worlds in 2017, winning bronze medals with the mixed 4x100m freestyle and mixed 4x100m medley relay teams. She also advanced to the finals of the 100m butterfly and 100m freestyle, finishing fourth and sixth, respectively. She also competed at the FINA World Junior Championships in 2017, capturing gold in five relay events. That followed her outstanding performance at the world juniors in 2015 when she won six medals as a 15-year-old. Her 11 career world junior championship medals made her the second-most decorated athlete in meet history.

In 2018, Oleksiak won three silver medals at the Commonwealth Games in Gold Coast, Australia, standing on the podium as a member of the women’s 4x100m medley, 4x100m freestyle and 4x200m freestyle relay teams. She posted top-five finishes in the 50m butterfly, 100m butterfly and 100m freestyle events.

A Little More About Penny

Getting into the Sport: Learned to swim at age 9 because she enjoyed swimming in the backyard with friends… Outside Interests: Enjoys reading, biking, playing with her dog… Odds and Ends: Collects Starbucks mugs for her mom and Hawaiian shirts for her dad when travelling… Travels with a grey blankie that is her good luck charm… Older brother Jamie is an NHL defenceman… Older sister Hayley is a former NCAA rower…