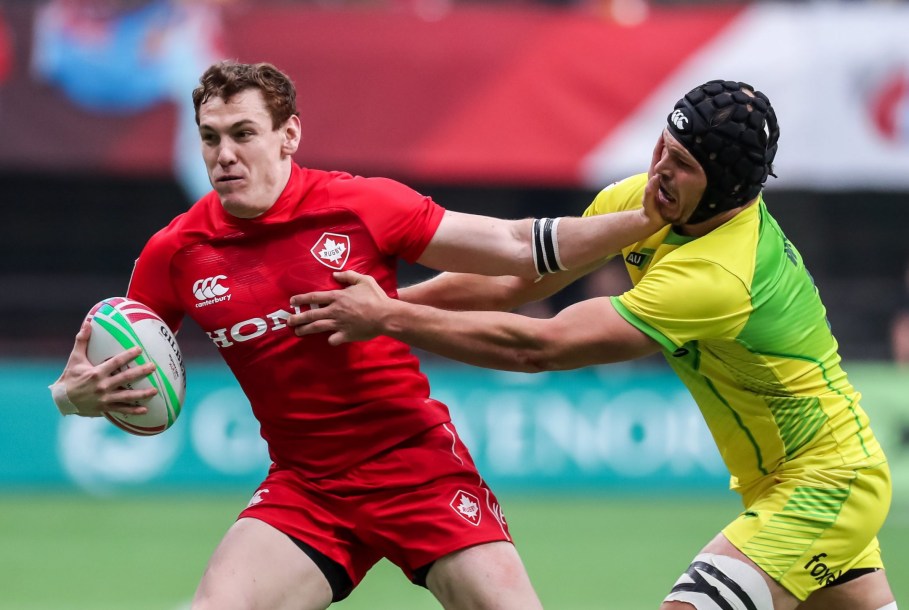 Phil Berna first played for Canada as a member of the U19 team at the Commonwealth Games Festival rugby league nines competition in 2014. He was then a member of the U20 union team that won silver at the 2015 World Rugby U20 Trophy in Lisbon.

Berna scored in his debut with the Canadian Men’s Sevens Team at the World Rugby Sevens Series stop in Wellington in 2016. He scored three tries for the Canadian team that competed at the final Olympic qualification tournament for Rio 2016, but did not earn a spot in the inaugural Olympic men’s rugby sevens event.

In 2016-17, Berna scored three tries in 17 matches in the Sevens Series, but a torn PCL kept him out of the last half of the season as the Canadian men finished the season eighth overall and qualified for the following year’s World Cup. At the third event of the 2017-18 Sevens Series in Sydney, Berna fractured a bone in his foot and missed more than a year of action, including the World Cup Sevens.

Finally healthy, he rejoined the team midway through the 2018-19 Sevens Series and became a mainstay in the lineup the rest of the season, playing in 39 matches and scoring a career high eight tries. During the summer of 2019 he helped Canada qualify for Tokyo 2020 by winning the Rugby Americas North Sevens tournament. He then took home a silver medal with Canada at the 2019 Pan Am Games, scoring a pair of tries during their semifinal win over Brazil.

In the shortened 2019-20 Sevens Series he equaled his eight tries from the year before in just 25 games, helping Canada get back into the top-eight in the overall standings. Berna made his Olympic debut at Tokyo 2020, scoring one try in six games as Canada made it to the quarterfinals.

A Little More About Phil

Getting into the sport: A friend brought him to a practice at age 14… Outside Interests: Enjoys going for coffee with his teammates… Graduated from Thompson Rivers University in 2018 with a degree in Business… Odds and Ends: Collects tacky t-shirts…Favourite quote: “Slow is smooth, smooth is fast”…