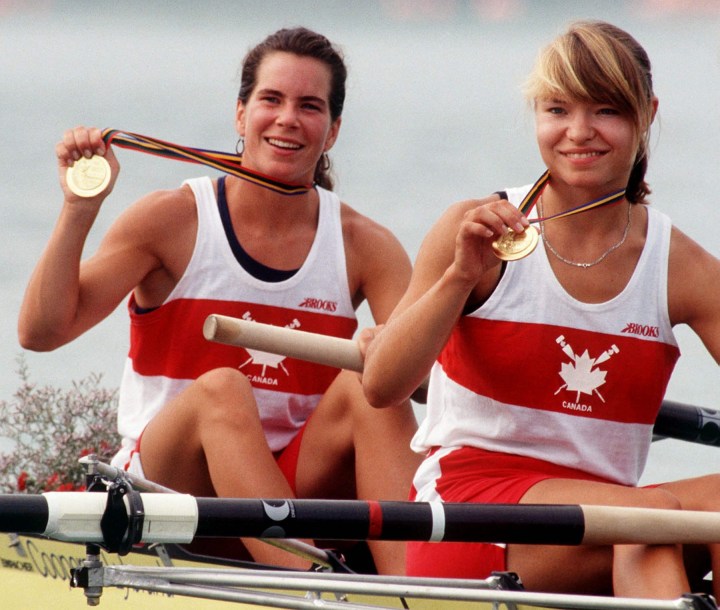 As Sochi 2014 beckons, we take a look at some incredible Maple Leaf moments over the course of Olympic history. Do you remember when?

August 5, 1928: Canada wins gold in world record time in the first ever 4x100m women’s relay in Olympic history at the Games of the IX Olympiad in Amsterdam. The quartet of Ethel Smith, Bobbie Rosenfeld, Myrtle Cook and Jane Bell won in 48.4 seconds for the first of four straight Olympic medals Canada would win in the event, but the only gold.

August 4, 1996: The Games of the XXVI Olympiad came to an end in Atlanta. Canada finished the Games with 22 medals (3 G, 11 S, 8 B), the most the country has ever won in a non-boycotted Summer Games. Rowers Marnie McBean and Kathleen Heddle, who had won gold and bronze at the Games, carry the Canadian flag at the Closing Ceremony.

August 3, 1992: Canadian hurdler Mark McKoy wins gold in the men’s 110m hurdles event in Barcelona. It was Canada’s first medal in the event since Tommy Thomson’s gold at Antwerp 1920. August 3, 1996: One week after his gold medal in the 100m, Donovan Bailey anchors the Canadian men’s 4x100m relay team to gold in Atlanta. Robert Esmie, Glenroy Gilbert, Carlton Chambers and Bruny Surin join him on the top step of the podium.

August 2, 1984: Legendary Canadian breaststroker Victor Davis wins gold in the 200m breaststroke in Los Angeles. It is the only Olympic medal Canada has ever won in the event.

August 2, 1992: Just weeks after suffering a broken leg along with nerve and muscle damage in an accident when her shell was hit by another boat, rower Silken Laumann wins bronze in the women’s single sculls at Barcelona 1992.

August 1, 1976: The first Olympic Games to be held in Canada come to a end in Montreal with silver medallist high jumper Greg Joy carrying the Canadian flag at the Closing Ceremony.

August 1, 1992: Rowers Marnie McBean and Kathleen Heddle win gold in the women’s coxless pair at Barcelona 1992. The next day they would join the coxed eight crew to win their second gold medals. July 31, 1976: High jumper Greg Joy wins silver on a rainy day at Montreal 1976. One of just three medals won by Canadians outside of the swimming pool, Joy capped Canada’s medal total at five silver and six bronze medals and arguably provided the highlight of the Games in the absence of a gold medal for the host country.

July 30, 1932: The Opening Ceremony of the Games of the X Olympiad is held in Los Angeles. Heavyweight boxer George Maughan is selected as the Canadian flag bearer and would go on to finish fourth. It is at these Games that a victory podium is used for the first time.

July 30, 1984: Swimmer Anne Ottenbrite wins gold in the women’s 200m breaststroke at Los Angeles 1984. Ottenbrite would go on to win silver in the 100m breaststroke and bronze in the 4x100m medley relay to be one of two triple medallists for Canacindy ishoyda at these Games. July 30, 1992: Swimmer Mark Tewksbury wins gold in the men’s 100m backstroke in Olympic record time at Barcelona 1992. No Canadian has won an Olympic medal in the event since then.

July 29, 1948: The Opening Ceremony of the Games of the XIV Olympiad is held in London. Bob McFarlane, a 400m runner, is selected as the Canadian flag bearer. July 28, 1984: The Opening Ceremony of the Games of the XXIII Olympiad is held in Los Angeles. Swimmer Alex Baumann leads the Canadian team as flag bearer and as the only team member to win two gold medals at the Games, winning both the men’s 200m and 400m individual medleys. Canada would record its best-ever Olympic Games performance with 44 medals (10 G, 18 S, 16 B), partially due to the boycott of the Games by the Soviet Union and 13 other nations.

July 28, 1996: A double medal day for Canada at the velodrome thanks to track cyclists Brian Walton and Curt Harnett. Walton takes silver in the men’s point race, Canada’s only medal ever in the event, while Harnett wins his second straight bronze in the men’s sprint. July 27, 1996: Sprinter Donovan Bailey wins gold in the men’s 100m event in a world record time of 9.84 seconds at Atlanta 1996. Bailey is the first Canadian Olympic champion in the event in 68 years. July 27, 1996: Rowers Marnie McBean and Kathleen Heddle win gold in the women’s double sculls at Atlanta 1996. It is the third career Olympic gold medal for the duo, who had won gold in the pair and eight at Barcelona 1992. July 25, 1992: The Opening Ceremony of the Games of the XXV Olympiad is held in Barcelona. Decathlete Michael Smith, the 1991 world silver medallist, is given the honour of being the Canadian flag bearer.

July 25, 1976: Four days after winning bronze in the 100m backstroke, 14-year-old swimmer Nancy Garapick finishes behind the same two East German women for another bronze in the 200m backstroke. Garapick was the only Canadian athlete to win two individual medals at Montreal 1976.

July 24, 1976: Swimmers Cheryl Gibson and Becky Smith win silver and bronze, respectively, in the women’s 400m individual medley at Montreal 1976. These remain the last Olympic medals that Canada has won in this event.

July 23, 1908: One day after winning bronze in the men’s 100m, Robert Kerr wins gold in the 200m at London 1908. He is the first Canadian to win Olympic medals in either of athletics’ sprint events.

July 21, 1996: Dual-sport athlete Clara Hughes wins the first of her six career Olympic medals, a bronze in the women’s road race at Atlanta 1996. She would add a second cycling bronze medal later in the Games in the time trial prior to becoming a four-time Olympic medallist in long track speed skating, making her one of Canada’s two most decorated Olympians and the only athlete in history to win multiple medals at both the Summer and Winter Games. July 19, 1996: The Opening Ceremony of the Games of the XXVI Olympiad is held in Atlanta. Middle distance runner Charmaine Crooks, a silver medallist at Los Angeles 1984, leads the team in as the Canadian flag bearer. Canada would go on to have its most successful non-boycotted Games, winning 22 medals (3 G, 11 S, 8 B).

July 17, 1976: The Opening Ceremony of the Games of the XXI Olympiad is held in Montreal. It is the first time Canada is the host of an Olympic Games and middle distance runner Abby Hoffman is given the honour of carrying the flag when the Canadian team marches into Olympic Stadium last.

July 15, 1900: George Orton becomes the first Canadian athlete to ever win an Olympic medal. At the Paris Games, Orton wins bronze in the 400m hurdles and just 45 minutes later captures gold in the 2500m steeplechase.