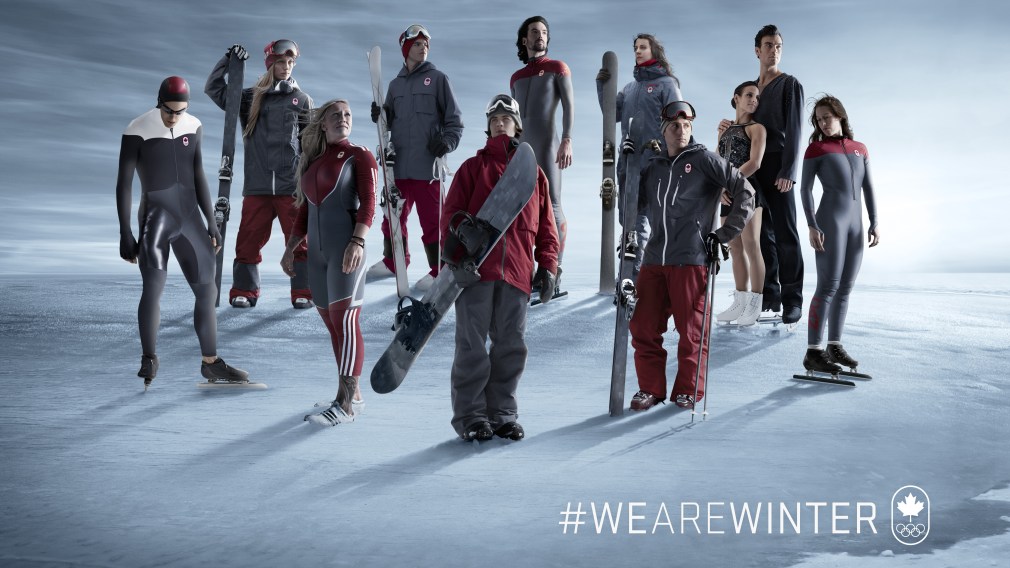 When Hayley Wickenheiser carries the Canadian flag into the Sochi 2014 Opening Ceremony, she will be followed by the biggest Canadian team ever at an Olympic Winter Games. In total, the Canadian Olympic Team will be made up of 221 athletes across 14 sports.

By the time the Closing Ceremony finally wraps up the Games on February 23rd, Canada hopes to have won the most medals of any other country at Sochi 2014. Here is a look sport-by-sport at what to watch for: Canada’s alpine skiers will be speeding toward the podium at Sochi 2014. Leading the way are the several of the fast and fearless Canadian Cowboys: Erik Guay, Jan Hudec, Mike Janyk, Manuel Osborne-Paradis, Benjamin Thomsen. Erik Guay recently made it to his 21st career World Cup podium, which set the record for the most World Cup podiums by a Canadian skier. Guay will be looking to complete his trophy case by adding the centrepiece, an Olympic gold medal. Bobsleigh superstar Kaillie Humphries will be looking to defend her gold medal from Vancouver 2010. With Heather Moyse, she was recently awarded the overall women’s World Cup bobsleigh title for 2013-14. On the men’s side, Canada will be sending three 2-man and 4-man sleds to the Games for the first time ever. All three pilots (Lyndon Rush, Justin Kripps and Chris Spring) have reached a World Cup podium this season.

The cross-country ski team at Sochi will include a great mix of veterans and rookies. The five women will be led by 2006 gold medallist Chandra Crawford, who will be attending her third Games. 2011 World Champs Alex Harvey and Devon Kershaw will both compete at their second Olympics, looking to improve on their 4th place finish in the team sprint at Vancouver 2010.

Canada is the most-decorated Olympic curling nation in history, with the men and women each having won a medal at every Olympic Curling tournament. Jennifer Jones’ women’s team and Brad Jacobs’ men’s team will be aiming to keep the streak alive in Sochi. No other country will have more figure skaters at the Sochi 2014 Olympic Winter Games than Canada. The 17 skaters will be looking to bring a nice collection of medals home with them from Russia. New to Sochi 2014 is the team event, which includes the combined placements of one man, one woman, one pair and one ice dance couple. Canada has great depth across all the figure skating disciplines and should be a favourite to win a team medal. Leading the team’s chances at winning the new team event are three-time world champion Patrick Chan, as well as reigning Olympic gold medallist ice dancers Tessa Virtue and Scott Moir.

Canada’s freestyle skiing team will be expected to take home a bunch of medals from the Sochi slopes. The best competition should come in men’s moguls where defending Olympic champ Alex Bilodeau will be challenged by teammate and defending World Cup champ Mikaël Kingsbury. The duo, recently led a Canadian sweep of a World Cup podium, along with fellow Olympian Marc-Antoine Gagnon. The women’s moguls team will feature the three Dufour-Lapointe sisters, all of whom are currently in the Top 5 of the World Cup standing: Justine is 2nd, Chloé is 3rd, Maxime is 5th. Canada’s ski cross team is also not to be underestimated, with three men and three women in the World Cup’s Top 10. Marielle Thompson is the top-ranked female, while Dave Duncan is the #2 ranked male. In addition to Moguls, Ski Cross and Aerials, freestyle skiing at Sochi 2014 will also include two brand new events: Halfpipe and Slopestyle. Canada could very well bring home some of the first-ever medals in those events, as they have a depth of great athletes in both events, on both the men’s and women’s sides. Team Canada will step onto the ice in Sochi as the defending men’s and women’s gold-medallists. The women’s team will draw inspiration from superstar and now six-time Olympian (5 Winter, 1 Summer) Hayley Wickenheiser, who will be Canada’s flag bearer at the Sochi 2014 Opening Ceremony. The men’s team has won two medals since NHLers were invited to play in the Olympics; both gold, and both on NHL-sized ice. Team Canada’s men will be looking to foil the host Russians and bring home the gold medal, regardless of the larger ice size. Head Coach Mike Babcock has selected Sidney Crosby as the team’s captain, with Jonathan Toews and Shea Weber as his assistants.

Three-time Olympians Samuel Edney and Alex Gough should lead a strong push for Canada’s first Olympic medals in the sport of Luge. Helping Canada’s chances to win their first Olympic Luge medal in Sochi is the addition of the new Team Relay event. Canada has strong competitors in the men’s, women’s and doubles events, which makes the Relay team one of the world’s best. The duo of Gough and Edney, along with doubles pair Tristan Walker and Justin Snith, have propelled the Relay team onto the World Cup podium four times this season. Olympic bronze medallist Mellisa Hollingsworth will be the only Olympic veteran on Canada’s Sochi 2014 Skeleton team. The three rookies on the team are Sarah Reid, John Fairbairn, and Eric Neilson. Both Reid and Fairbairn have found their way onto the World Cup podium this season. All four athletes will don graphically intimidating helmets, with the hopes of intimidating their competition en-route to repeating Jon Montgomery’s famous beer-chugging victory walk from Vancouver 2010.

For the first time ever, women will take part in the Olympic sport of Ski Jumping at Sochi. Canada will be sending three athletes to take part in the inaugural event, including Atsuko Tanaka, who finished 4th in a World Cup event earlier this season. Olympic Snowboarding will add the new and exciting event of Slopestyle to the Sochi 2014 Winter Olympic Games schedule. Canada has a great chance to take home a stack of medals from Slopestyle’s debut, with X-Games gold-medallists Mark McMorris, Max Parrot, and Sebastien Toutant making up the men’s team, and 2012 World Champion Spencer O’Brien leading the women. In Snowboardcross, Maëlle Ricker will be looking to defend her gold medal from Vancouver 2010, while fellow Canadian and current World Cup leader Dominique Maltais will try to add to her Bronze medal from Turin 2006. Olympic veteran Jasey-Jay Anderson will be making his fifth Olympic appearance in Sochi, aiming to defend his Parallel GS gold from Vancouver 2010, as well as taking part in the new Parallel Slalom event. The sport of Short Track Speed Skating in Canada has come to be defined by one man: Charles Hamelin. Charles followed up his silver in the 5,000m Relay at Turin 2006, with a Gold in the Vancouver 2010 5,000m Relay as well as the 500m. His girlfriend Marianne St-Gelais will also be part of the Sochi team, and will be looking to improve on her silver medals in the 3,000m Relay and 500m at Vancouver 2010. These are just a few of the names and headlines to keep an eye on at Sochi 2014; the list of Canadian medal hopefuls is very long in almost every sport. Team Canada should have a good opportunity to achieve their stated goal of winning more medals than any other country this February. Make sure you don’t miss a single Canadian athlete compete in Sochi, as you never know when those inspirational, memorable moments will happen. Go Canada go! #WeAreWinter